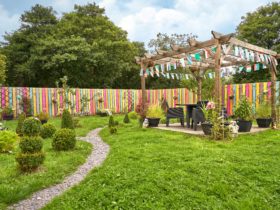 The Love Where You Live Campaign has now been rolled out city wide, targeting areas in wards across the Cardiff which are in need of a deep clean.

The campaign was set up over two years ago to work in partnership with communities across the city to create a sense of pride in the communities that we all live in and to spread the message that littering and fly-tipping isn’t acceptable.

As part of the campaign, a Cardiff Council team carries out blitz operations, digging out silt and debris from between the pavement and the roads, clearing gullies and drains, litter picking, cutting back overgrowth in lanes as well as any other work that is required.

“The uptake from the community with this campaign has been superb and we now have 13 community groups set up across the city. They all do an excellent job supporting the council to try to keep communities clean and tidy and I would like to thank them all for their efforts.

“We need to create a sense of pride in our communities, so that people understand that throwing litter on the floor or fly tipping in back lanes isn’t acceptable. Initially the campaign focussed on the inner more densely populated areas, where this work is most needed but I am pleased to report that all wards across the city will now receive this service.”

Community litter picks have been organised from between 10am and 11.30am at the following locations:

“As well as working with the community to clean up areas of the city, we also want to work with the public to stop fly tipping.

“The Environmental Scrutiny Committee is carrying out a public engagement exercise with the public to ask for their views on the blight that litter and fly tipping causes on their communities and this will go live on June 18th.

“The council is taking a harder line on fly-tipping and will be using infrared cameras in fly tipping hotspots to catch the minority that are carrying out this environmental crime.

“Together we can tackle the problem and use the resources available to target areas of the city that need it most.”

Areas of the following wards will then receive deep clean this summer: