Cardiff and Vale College has hosted its first student musical, ‘Schools We Will Rock you’.

Ben Elton’s futuristic tale based on Queen’s greatest hits packed out the College’s Theatr Michael Sheen over three nights. Students from across the College rehearsed for months and took part in all aspects of the production as performers and musicians. They were joined by staff and tutors to stage the production.

“We have been delighted to stage ‘We Will Rock You’ at the College,” Lisa Jones said. “All of ours students worked so hard over the past few months to perfect their performances and it really showed – they were amazing.

“As a College we pride ourselves on our high standards and the sole purpose of this enrichment exercise was to provide an enjoyable experience for the students while developing their performance and musical skills. It was a first for Cardiff and Vale College and it was a thrilling opportunity to support and showcase our students’ talent.”

The students certainly rocked their audience. Gary and Cathy Chivers said performance was in “a very intimate setting which gave a feeling of involvement”.

They continued: “The costumes and makeup were brilliant and the cast superb. Scaramouche was outstanding, what a little pocket rocket! The title of the show was right – you did rock us!”

“Tonight I had the great pleasure of watching the CAVC students perform ‘We Will Rock You’ and they certainly did. Every single one of those young actors gave 110%. They were enthusiastic, happy and sang with their hearts.”

“We were lucky enough to visit the Michael Sheen theatre for the first performance of ‘Schools We Will Rock You’ delivered by the students and staff of Cardiff and the Vale College. From the moment we entered the building we received a warm greeting from the staff and pupils working as part of the welcoming team.

“The evening continued to be a testament of a hardworking cohesive team. The stage design and lighting along with the technical design and sound was professionally executed and the producers and production team excelled themselves. Hair, make up, costumes and props added to the spectacle.

“However, the final words of appreciation have to go to the thirteen committed, energetic and talented cast. Each and every one of them entertained the crowd continuously with their commitment, energy, clear diction, singing, dance moves and acting.

“The show was well cast and the performances from each individual cast member was very believable. The show was well rehearsed and entertaining from start to finish. A colourful, enthusiastic, energetic and dynamic show!! Well done to the Producers, Production Team and students that worked so hard. A truly successful enrichment project!” 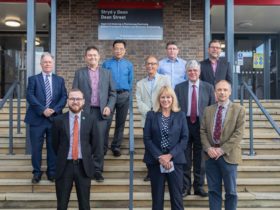