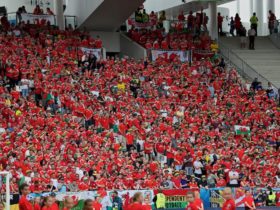 Football fans urged to support Wales at home this summer

It is not every day that Welsh football fans get to follow their beloved national team to a World Cup or the main draw of a European Championships, because the odds are always against them making it through tough qualifying campaigns. However, that is the treat in store for Welsh supporters this summer, as Ryan Giggs’ charges head on into their Group A campaign with the backing of betting experts and tipsters at oddschecker, who believe they can upset Italy, Switzerland, and Turkey on their way to the coveted knockout stages.

Here we delve into the challenges that face the Welsh side at Euro 2020, as they try to go one better than they did in 2016 when they made it all the way to the semi-finals, having demolished the likes of Belgium along the way.

Managerial Madness in the Tournament Lead up

One of the first major challenges facing the Welsh squad in their preparation for the European Championship is that their manager Ryan Giggs has not been able to take the reins of his team due to issues away from the sport.

This has meant that Rob Page has taken control of the team in Giggs’ absence. Thus far that arrangement appears to have worked well, but it is one thing stringing together friendly or Nations League results and quite another plotting a path through a major tournament.

Page has now been promoted from interim/caretaker manager to the real thing. It remains to be seen if a man whose only previous managerial experience came at Northampton Town and Port Vale will be up to the standards required. No doubt the Welsh underdog spirit will kick in accordingly, but surely that can only take the manager and his charges so far.

Burak Yılmaz Could Be A Big Problem

Recent Welsh success has been based around solid defensive foundations, but they will be tested to the max in Group A, especially by the striker who has led Lille to Ligue 1 success this season, Burak Yılmaz.

The Turkish talisman will almost be 36-years of age by the time Euro 2020 comes around, but he is showing that age is just a number, having netted no less than 15 goals in the French topflight this season. While many will expect Wales’ biggest Group A challenge to come from the Italians, they should not discount the threat posed by Yılmaz and Co.

Italians Going Back to Basics Could Spell Trouble

Italian football is undergoing something of an identity crisis. Not only did the national side fail to qualify for World Cup 2018, but Serie A  was won by Chinese owned Inter Milan, breaking the dominance of Juventus.

However, footy fans should not think that all this change will bring about a shift in how the Italian national team approach the game. Since their World Cup qualifying humiliation, they have gone back to basics under Roberto Mancini, becoming the defensive masterminds they have always been. The team has only conceded three goals in their last eleven outings, during which time they have also remained unbeaten.

Considering they will have home advantage for many of their games, the Italians will prove a very tough nut for the Welsh to crack this summer.

Are Bale and Ramsey Over the Hill?

Wales have always been a team full of unheralded individuals who can turn the heat up a notch when required, but there have always been a couple of diamonds in the rough who have single-handedly won matches for them as well. Two such men are Aaron Ramsey and Gareth Bale, both of whom are still operating near the elite level of European club football.

Unfortunately, that operating tends to have taken place more on the benches and training grounds at Spurs and Juventus respectively, rather than in the first team. It is unclear if notching a hat trick against whipping boys Sheffield United is enough to convince pundits that Gareth Bale is still a top international star. Meanwhile Ramsey has not managed to regularly break into a Juventus side that has been sliding down the Serie A standings all season long.

Will they be able to motivate themselves for one last hurrah, or will Welsh hopes come crashing down as Bale and Ramsey think more about their summer holidays than making it to the Wembley showcase?

Playing a Long Way from Home

In comparison to Scotland and England, Wales have certainly drawn the short straw when it comes to where their Euro 2020 fixtures are due to take place. While the Three Lions and the Tartan Army will be enjoying group games on home turf, the Welsh Dragon will be expected to spread its wings for Rome and Baku, with the latter being a particularly strange place for Euro 2020 games to be played.

There is no doubt that this will put the Welsh at something of a disadvantage, although only Italy have the benefit of being able to play group games on their home patch.

The Red Wall of Cymru

Another important aspect of any international tournament campaign is having a team anthem that can inspire both players and supporters alike. In that regard Wales have a belter this summer, as the The Alarm have teamed up with The Red Wall Supporters’ Group to produce the much anticipated “The Red Wall of Cymru”.

If Wales can overcome all of this, they could have a fighter’s chance of making it through to the knockouts and beyond. Despite all the challenges the Welsh side will face this summer, they can rest easy knowing that their anthem blows all the rest out the water.