Property consultancy Knight Frank has reported a challenging start for the industrial property market within Wales in the first half of 2019.

The decision not to progress with the M4 Relief Road and closures announced by both Quinn Radiators, Newport, and Ford at Bridgend – in addition to the ongoing saga of Brexit – has added to uncertainty within the market.

Neil Francis, head of the firm’s Industrial & Logistics team in Cardiff, said: “This, coupled with a continued lack of Grade A space, has resulted in just five recorded transactions for occupied industrial space over 50,000 sq ft during the first six months of the year (H1).

However, unlike previous recent years these recorded transactions had been dominated by leasehold deals with the only sale being the acquisition of IP5 at Imperial Park, Newport by NHS Trust.

“This 270,000 sq ft unit was one of the last remaining Grade A properties in South Wales and will be used to store and distribute fast-moving goods for hospitals and healthcare facilities across the whole of Wales,” he said.

“The supply of Grade A space will be boosted in South Wales by St Modwen’s speculative development of 30,000 sq ft and 100,000 sq ft at St Modwen Park, Newport in Llanwern and Border Group’s 58,000 sq ft in Oakdale.”

In North Wales, a joint venture between Midlands-based Trebor Developments and Maple Grove Developments has completed the purchase of a 5.3-acre site in Deeside and will now construct three speculative industrial units, ranging from 10,000 sq ft to 50,000 sq ft on this brownfield site.

Another significant transaction, away from the occupier market, was the speculative purchase of The Box on Milland Road in Neath. The Local Authority acquired this 400,000 sq ft former factory from Crown Packaging early in 2019 and, with a loan from the Welsh Government, was planning to redevelop and refurbish it to create a mix of industrial and office space close to the M4 Motorway.

Neil Francis added: “In addition to the “Big Shed” market, there continues to be a strong demand for new build workshop units of up to 2,000 sq ft.

“It is this sized market that has provided confidence for developers like Formaction and Dawan Developments to progress with speculative schemes on sites of one to two acres. Furthermore, via a Property Development Grant, a number of Local Authorities – Blaenau Gwent, Bridgend, Caerphilly and RCT – are responding to this demand by progressing with their own 20,000 sq ft multi-unit developments.”

Looking ahead, he said that with a number of larger units currently under offer, and active requirements within the market, it was expected that take up in H2 2019 would follow a similar trend to 2018. This would result in a further one million sq ft being transacted and provide for a similar take up level as last year.

“The lack of Grade A stock within the market is encouraging landlords to refurbish their existing stock. Those that provide a quality finished product will not only benefit from good demand but will see their headline rent increase,” he said.

“While any closure is never good news, a positive to consider is that should Quinn Radiators’ unit be released to the market it will offer one million sq ft of Grade A space close to Junction 28 of the M4 Motorway. We would expect significant demand from both investors who are looking to sub divide and occupiers in this well-located facility.

“It is also positive to note that we are now witnessing a number of occupiers prepared to consider new build options, as opposed to waiting for better quality second hand stock to be released into the market.

“Also, we believe the lack of Grade A industrial space will lead to occupiers seeking new build as an option so we expect a number of design and build projects to be announced in the next six to 12 months.” 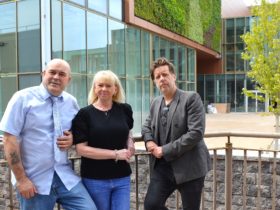