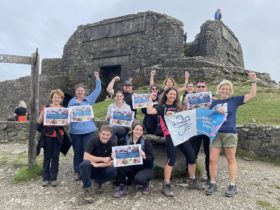 A TEACHER who was diagnosed with breast cancer on maternity leave during the COVID-19 pandemic has been chosen to launch Cancer Research UK’s World Cancer campaign in Wales.

Amy Isidoro from Cwmbran was just 29 when she went to the GP in July last year after finding a lump, deep within her breast.

The mum-of-two, who had given birth to her son, Benjamin, six months earlier, said: “The lump was actually quite hard to detect as I could only feel it when lying down.

“Although I was young, I just wanted to rule anything out so I could either deal with it or stop worrying.”

The GP confirmed she could feel the lump and said it could have been caused by hormonal changes in Amy’s body after having a baby.

However, a later biopsy revealed Amy’s worst fears and she was told she had triple negative breast cancer – the most aggressive type which is also the hardest treat.

She said: “As well as being shocked, I was practical, I wanted to know what the next steps were.”

Some women with triple negative breast cancer also have a BRCA1 gene fault. BRCA1 is one of the gene faults that can increase the risk of cancer within families.

Amy, who also has a daughter, Phoebe, five, said: “I just couldn’t stop thinking about my children and especially my daughter. If it was in my genes would she be affected too? I couldn’t bear that thought most of all.”

Thankfully, Amy, 30, has recently discovered she isn’t a carrier of the gene.

Amy, a primary school teacher at Ringland Primary School in Newport, has finished her sixth and final round of chemotherapy which has reduced the size of the tumour significantly. She is now waiting to have a mastectomy in February and will then start radiotherapy.

She is looking forward to a more positive 2021 and has started the year by supporting Cancer Research UK’s World Cancer Day appeal to help raise vital funds for life-saving research. She is urging the public to donate what they can or wear the charity’s Unity Band on February 4.

The Unity Band is available in three different colours – pink, navy and blue. It can be worn in memory of a loved one, to celebrate people who’ve overcome cancer or in support of those going through treatment.

She said: “I feel honoured to be launching the charity’s World Cancer Day appeal in Wales as I know how important research is. I want people across Wales to show their support and help Cancer Research UK make a real difference to people affected by cancer.”

Looking back at last year, one of the hardest times for Amy was when she was rushed to Nevill Hall Hospital in Abergavenny with an infection and an allergic reaction to one of her treatments.

She was in hospital for five days and due to COVID 19, Amy was unable to have any visitors – including her baby Benjamin and daughter Phoebe who were just seven months and five years old at the time – as well as husband, Andrew.

Amy said: “I can honestly say that experience has been the worst part of all of this, not seeing my family when I really needed them was so hard. The doctors and nurses were great, but I really wanted to be with my loved ones. My husband even drove to the car park and called me so I could wave at him and the children from the window.”

Thankfully Amy continued with her treatment without too much complication after her medication was modified.

As Amy’s immune system has been severely compromised by the chemotherapy, she and her family and parents who live close by have had to limit contact as much as possible. This means she is also not able to return to work for fear of contracting COVID-19 or any other viruses or infections.

“I have also really missed teaching and I can’t wait to go back into the classroom and see all the children,” said Amy.

“It has been really hard having a baby in lockdown and then going through cancer treatment. Thankfully, the children keep me really busy so I don’t have too much time to think about things.”

Despite being diagnosed with breast cancer, Amy remains incredibly positive and credits her family with helping her cope with the diagnosis and treatment and recently celebrated her 30th birthday at home in lockdown.

Amy’s Husband, Andrew, who she married two years ago, has also been “amazing”.

“He’s been brilliant, he’s really positive and supportive and thankfully has been able to work from home so he’s been able to be around more,” said Amy.

“I think initially he felt really helpless, he said ‘there’s nothing I can do’.”

Incredibly Andrew has pledged to take part in 13 running races this year, covering a total of 150 kilometres and hopes to raise over £3,000 for Cancer Research UK in 2021. He has already raised more than £2,800 for the charity.

“I’m so proud of him for taking on this enormous challenge, he’s not done anything like this before,” said Amy.

Amy is also keen to raise awareness of the importance of early diagnosis.

She said: “If you have any symptoms that you are worried about, you must trust your instincts and go to your doctor. I was never, ever made to feel silly or that it could be nothing, doctors want to see you and they want to get you treated. I’m so glad I didn’t wait as I know the cancer could have spread further if I had delayed getting the lump checked.”

Every year, around 19,300 people are diagnosed with the disease in Wales.*

By donating or getting a Unity Band, people will be raising money to help get life-saving research back on track after the impact of the COVID-19 pandemic.

Cancer Research UK expects to see its fundraising income decline by a staggering £300m over the next three years, which could put future breakthroughs at risk for people like Amy.

World Cancer Day is an international initiative, uniting people around the world on 4 February to beat the disease.

In the UK, survival has doubled in the last 40 years and Cancer Research UK’s work has been at the heart of that progress. But right now, research is under threat.

One in two people in the UK will get cancer in their lifetime**, which is why the charity is absolutely determined to continue to create better cancer treatments for tomorrow.

Ruth Amies, Cancer Research UK spokesperson for Wales, said: “COVID-19 has hit us hard, so we are very grateful to Amy for her support and helping to underline the stark reality of the current situation.

“Our research has played a role in developing 8 of the world’s top 10 cancer drugs and we’re working every day to find new ways to prevent, diagnose and treat the disease. But we can’t do it alone.

“By donating to mark World Cancer Day people in Wales will be funding world-class research to help more people, like Amy. Together, we will beat cancer.”

Donate or get a Unity Band online at cruk.org/worldcancerday.