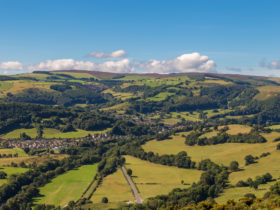 Lights, camera, action – Denbigh Town’s £200,000 new pitch will be getting the Hollywood treatment when it is the centrepiece of S4C’s Friday night DW Welsh Cup football action next week (September 3).

It will be the first time the newly re-laid pitch is played on when Town host Caernarfon Town in the second round of the Cup in front of an expected 500 fans under the Central Park floodlights (7.45pm kick-off).

Club Chairman Shon Powell, Director of local business Lock Stock Self-Storage, said: “We’re delighted and thrilled. Caernarfon are a very well supported club and to have them under floodlights on TV in the Cup as the first game on the new pitch is brilliant.

“We couldn’t have asked for a bigger occasion.

“It’s taken six months of really hard work on top of 18 months of planning to get to where we are now with the ground looking in pristine condition.”

Denbigh’s Central Park ground has been plagued with flooding and drainage problems for years and the club had regularly been forced to postpone fixtures because the pitch was unfit.

The renovation of the pitch is the latest in a series of major improvements to Central Park which has already seen the club build a 475-seat main stand and a new clubhouse and install floodlights and secure perimeter fencing.

It is part of a long-term plan to improve the facilities to enable Denbigh Town, currently in the third tier of Welsh football, the Lock Stock Ardal North West Division, to play at the top level, the Cymru Premier League.

That’s where their Welsh Cup opponents, Caernarfon, currently are and the cup-tie will be a good test for the ambitious Vale of Clwyd side and a showcase for their Central Park home.

Two months ago it was bare ground after the old pitch, on heavy clay soil and with an ancient and partially collapsed drainage system, had been dug up, dug out and replaced by 700 tons of new material, 600 tons of sand.

Local firm 360 Ground Care, from St Asaph and run by Denbigh-born Miles Todd, a former Town player, have re-laid the pitch including installing a totally new drainage system with drains a metre down every five metres across the pitch.

Every metre running the length of the pitch, 100 metres, are metre deep, 10-centimetre-wide sand channels taking water down to the drains while 16 computer-controlled pop-up sprinklers ensure the ground never dries out.

The water for the sprinkler system comes from a borehole drilled 60 metres down to draw water from under the Vale of Clwyd to two giant 25,000 litre tanks which can be refilled in ten hours.

Much of the £200,000 cost has been met by grants from the Clocaenog Forest Wind Farm Fund, Sport Wales and Denbighshire Commuted Funds.

Local support has been led by the club’s main sponsor, Lock Stock Self Storage, and over 60 local business sponsors and Shon Powell added: “Thanks must go to all those who have supported us because without them the project would never have got off the ground.”

Miles Todd, whose company’s clients include whose clients include the Football Association of Wales, the Welsh Rugby Union and Royal St David’s Golf Club, said: “The drainage system was very old-fashioned.  Times have changed since it was put in and methods have changed.

“The soil here is a very heavy clay so that all had to be stripped away and replaced with 700 tons of mainly sand with the top 50 to 75 millimetres almost all sand to help the surface drainage.”

Shon Powell said: “We now have a pitch that we will be able to play on two or three times a week throughout the season when we sometimes struggled to play once a month.

“We have two senior sides, a very ambitious Ladies’ team who will need to play their games on our main pitch if they are to progress, a disabled section and a thriving junior section which now has 10 teams from the ages of six to 16.

“In total we have about 280 people playing football every week with over 40 coaches and 25 volunteers and committee members so we need the very best facilities we can.

“It has also been important to us to be able to appoint local contractors to carry out all the works for this project and as well as 360 Groundcare we have used Dragon Drilling, Alan Ramsbottom Landscaping and C J Electrics.”