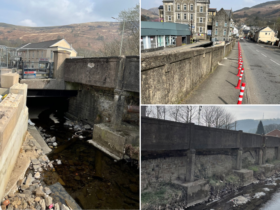 Some 40 years on from the Falklands Conflict, Paul Bromwell still vividly remembers his time in the South Atlantic, especially the day he lost 48 Comrades and friends during one incident.

Now Chief Executive of the Valley Veterans, Mr Bromwell works closely with the Council’s Armed Forces Veterans Service to help and support those who need it the most.

Having served in the Welsh Guards during the Falklands Conflict 40 years ago, he is all too aware of the serious effects of returning to civilian life once leaving the Armed Forces.

Living in the Rhondda, Mr Bromwell says he had no professional help available to him when he returned from the Falklands in 1982 and has since suffered with Post-Traumatic Stress Disorder (PTSD) following his time in the Armed Forces.

Paul Bromwell, a recipient of the inaugural Aneurin Bevan People’s NHS Award, said: “Being a veteran living in Rhondda Cynon Taf, I feel so lucky today to have the support of the Council’s Armed Forces Veterans Service. It’s comforting to know that us veterans have such amazing support behind us.

“The Council was the first local authority in Wales to sign up to the Armed Forces Covenant. It set the mark for the rest of Wales to follow and for the first time in 40 years, I know I have help and support available to myself and our group members.

“The support I receive from the Council’s Armed Forces Veterans Service is amazing. There is so much help out there these days, you just need to know where to turn to get that help.

“Valleys Veterans is not solely made up of senior veterans, many of our members served in Afghanistan, Iraq and the Falklands. Younger men who have returned to civilian life affected by their time in service.

“When I served during the Falklands War, I lost 48 good friends in just one terrible incident. I never thought that the events of that day would affect me as much as they did.

“I really struggled when I returned to civilian life. I was suffering following my experiences – I was only 18 at the time and working behind enemy lines. All of a sudden, at the blink of an eye, my mates that I served with were no longer there.

“When I would go for a stroll back home, I would see young men my own age kicking a ball about in the local park, without a care in the world. But in my own head, I was still in a war zone and it took me a long time to deal with that.”

The 1982 Falklands Conflict, which began 40 years ago, lasted for 10 weeks, resulting in the deaths of more than 900 people. The Argentine invasion of the British-held Falkland islands led to the deaths of 255 British military personnel, three islanders and 649 Argentine soldiers during the 74-day Conflict.

Valley Veterans is a veteran-led organisation, supported by the Council and based in Rhondda Cynon Taf. It was founded over 10 years ago as an informal support group for PTSD sufferers. It is now a vibrant community hub with more than 140 active participants. The group holds an Armed Forces Breakfast Club every Thursday, attracting up to 60 veterans each week.

The inaugural Aneurin Bevan People’s NHS Awards recognised and celebrated the work of all those unsung heroes who have a huge impact on communities across Wales and Mr Bromwell said he was both honoured and delighted to be a recipient.

Rhondda Cynon Taf Council was one of the first local authorities in Wales to sign up to the Armed Forces Covenant in 2012, a commitment that was reaffirmed in 2018.

The Rhondda Cynon Taf Veteran Advice Service is available for all past and present Armed Forces personnel and their families. Email: [email protected] or call 07747 485 619 (Monday to Friday, 8:30am to 5pm).