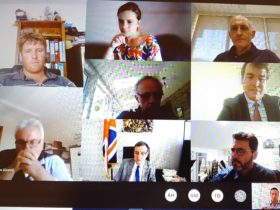 The 2018 European Union (Withdrawal) Act must be amended to allow the revocation of Article 50 in order to reflect Parliament’s rejection of a no-deal Brexit , the Farmers’ Union of Wales (FUW) has said.

Speaking after a no-deal Brexit contingency planning meeting with Welsh Government officials, FUW Head of Policy Nick Fenwick said: “The FUW has argued for Article 50 to be revoked to allow time for an orderly Brexit since mid January.

“Now that Parliament has rejected leaving the EU without a deal, the relevant legislation must be amended to reflect this view and cater for all possible eventualities – including needing to revoke Article 50 in order to respect the view of Parliament.”

Dr Fenwick said that the 29th March 2019 deadline in the legislation should be removed, and that merely replacing it with another ‘cliff edge date’ in a few months time would be short sighted and not reflect the dangers.

“So long as the Withdrawal Act stands we are set to leave the European Union, so claims that this would go against the vote to leave the EU are false.

“Those who have persuaded the general public that the Brexit process that can be gone through in a couple of years without major risks to jobs, businesses and the economy have been unrealistic and misled Brexiteers about the reality of a safe timetable.

“We now need the Act to be amended to restore us to a realistic and safe timetable,” he added.

Dr Fenwick also said that the vote to leave the EU equated to a vote to leaving the customs union and single market were misguided or disingenuous about the nature of the Referendum.

“Leaving the customs union and the single market were not on the ballot paper – in fact, the overwhelming majority of those who voted, whether in favour or against Brexit, had no knowledge of the customs union. Those who voted to leave the EU did so on a variety of grounds; yes, for many that included free movement, but for many others it was to do with other issues, including being a protest vote.

“The proportion who voted for the type of ‘red lines’ Brexit put forward by the Prime Minister is well below 50 percent, so claims that the Government’s view reflects the view of the people are simply wrong.”

Dr Fenwick said that the willingness to placate a minority who were in favour of a harder Brexit while ignoring the views of the majority of those who voted in the referendum had led directly to the current impasse.

“Changing the Withdrawal Act to allow agreements to be reached and Brexit to take place over a safe and realistic timetable – rather than rescinding it – should give the electorate the confidence that Brexit will happen, but in an orderly manner.”

Dr Fenwick said that revoking Article 50 was the only sensible way to secure sufficient time to do this.