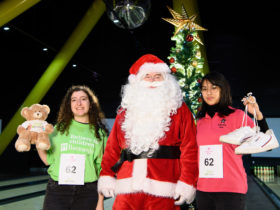 The former Mayor of Rhondda Cynon Taf, Councillor Jill Bonetto, attended a Help for Heroes veterans’ model-making session, at Rhydyfelin AFC, to give the Charity a cheque for more than £30,000.

She was joined by fellow councillors and officers, representatives from the Armed Forces charity, its beneficiaries, and officials from the football club. Money raised was supplemented by an additional £235 raised by the children at Ysgol Gynradd Gymraeg Evan James, in Rhondda Road, Pontypridd.

Cllr Bonetto explained: “I was lost for words when I was told how much we had raised. The reason I chose Help for Heroes is that I think it goes that step further with the veterans. It’s not just for the past, it’s for the future as well. There are a lot of young people in the Armed Forces, and we need to think of those coming up, and I think this is the right charity for the younger ones.

“It offers so much more and shows that, if you get injured or get PTSD, it isn’t the end for you – it’s a new beginning. It’s different to what it used to be and that’s why I chose Help for Heroes.”

Cllr Bonetto can talk from personal experience about psychological injuries, as her son, a former soldier, suffers from PTSD to this day.

She added: “My son served in the first Gulf War; he was 19 when he went out there. I sent him out as, still, a boy and I got back a very different young man when he returned. He was quieter, withdrawn, but nothing to show there was an illness.

“He was still in the Forces, at the time, and he became suicidal, but, luckily, he went into a military hospital where he stayed for weeks. He’s learned to live with his condition, but it doesn’t go away. Every so often he might have a dark moment and has to take himself off.

“People need to know you don’t get cured of PTSD, you just hope they learn to cope. And not everybody can.”

Accepting the donation on behalf of Help for Heroes and thanking Cllr Bonetto, for choosing to support Help for Heroes, the Charity’s Area Fundraising Manager, Rhys Edwards, told her: “Thank you for choosing Help for Heroes. The majority of our money comes from community fundraising, and, without that money, we can’t continue to offer the activities and support we do, such as this model-making session.

“This is grass-roots stuff, bringing like-minded people together and helping them de-stress and live life to the full. We help veterans with physical or psychological issues, and £30,235 is a fantastic amount and will help make a difference for so many people. Thank you.”