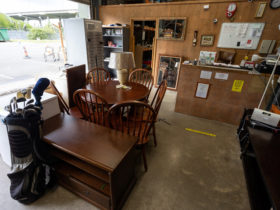 Grab a bargain at the Neath Port Talbot Reuse Shop

A UK-wide campaign which fights to protect vulnerable people living in cold homes has praised a new Swansea Council proposal.

Members of Fuel Poverty Action say the council’s idea to set up a not-for-profit energy firm could help many people.

“All such local initiatives have to operate within the constraints of a wholesale market and national grid that are dominated by profiteering fossil fuel dinosaurs.

“However, municipal energy companies can still make the supply to households more accountable, fairer and hopefully cheaper. Along with a shift to renewable energy and better insulated homes, this has to be a move in the right direction.”

The council is proposing a pioneering solution to cut household and business energy bills across the city.

It would see the creation of a people-friendly not-for-profit energy services company based in the city. Local residents and organisations would be its key focus.

The socially responsible enterprise would help address the challenge of high gas and electric charges faced by Swansea residents and the difficulty faced by local businesses securing good energy deals.

The company would be set up and wholly owned by the council as an arm’s length enterprise at no cost to the taxpayer. It would be the first such council enterprise in Wales although a small number exist in England.

As part of a feasibility study into the proposal, a public consultation throughout July and until August 24 is asking local residents whether they would consider buying energy at a low cost from a local, people-friendly, not-for-profit company.

If the public feedback is positive, a detailed business case will be drawn up for the setting up the company. If viable, the company could launch within two years.

“A not-for-profit arm’s length energy company owned by the council could make a significant difference to the gas and electricity bills for families and businesses across Swansea, offering a cheaper and potentially greener alternative. Therefore it is extremely positive to see such strong support from an organisation such as Fuel Poverty Action.

“I would urge people to give just three minutes of their time to have their say and take part in the consultation which concludes on August 24.”

To join the consultation go to: www.swansea.gov.uk/haveyoursay