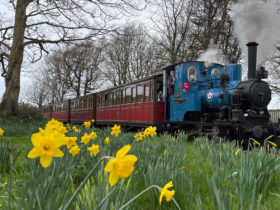 Special service put on at Talyllyn Railway for Good Friday

A fantastic line-up of live music is planned throughout the day during Aberdare Festival 2018.

Sponsored by the award-winning Penaluna’s Famous Fish & Chips, Aberdare Festival takes place at Aberdare Park on Saturday, May 26, offering fun for all the family.

Organised by Rhondda Cynon Taf Council, gates will be open from 11am until 5pm, with live music by local performers throughout the day on a dedicated outdoor music stage, starting from 12pm onwards.

“We have such a wealth of musical talent across our County Borough, and the live music stage at Aberdare Festival is the perfect place for up-and-coming bands and solo performers to play to a large audience.

“Some of this year’s line-up is also part of the very successful The Forte Project, a collaboration with Arts Council Wales and supported by the Council and neighbouring local authorities.

“Aberdare Festival will be alive with the sound of music, offering something for all musical tastes throughout the day. Please come along and support all of the acts.”

Among those performing live at Aberdare Festival 2018 are:

A young singer/songwriter from Ferndale with a captivating voice. He also produces enigmatic lyrics and is one of the 10 acts which form part of The Forte Project 2018, an artist development project supported by Rhondda Cynon Taf Council and Arts Council of Wales.

A three-piece ‘Electro Art-Punk’ band, from Aberdare and Mountain Ash, which formed in 2016. They have a vast array of influences including artists such as Devo, The Flaming Lips, The Fall, Sonic Youth, Landscape and The Human League. They have also performed sell-out gigs supporting UK indie band Wolf Alice.

A talented performer from Rhondda who recently gained success in the final stages of Voice of the Valleys, a talent search which aims to work people across Wales to assist them to build their self-confidence and performance.

An Aberdare-based nine-piece funk outfit which amazes audiences across the land with their up-tempo brand of soul and funk. Their set includes music inspired by the sounds of such names as Sly and the Family Stone, James Brown and Parliament Funkadelic. Always with them is the legendary DJ Martini Alan, the undisputed Funk-spinning DJ Master, armed with his booming sound system which will get the crowd dancing along from the time they set foot on stage.

Formedin 2017, the four-piece rock band from Aberdare and Merthyr Tydfil are steadily building a profile with their own brand of indie/shoe-gaze. Having performed all over South Wales, the band are part of this year’s The Forte Project, the artist development project supported by Rhondda Cynon Taf Council and Arts Council of Wales.

A 17-year-old performer from Aberdare whose love for music and her vocal ability saw her shine as a contestant on ITV’s The Voice in 2016. Chosen in the blind auditions by Will.i.am and Gavin Rossdale, her journey on the show took her to the live grand final.