Improved connectivity is vital for the future success of Cardiff

The headline NatWest Wales Business Activity Index – a seasonally adjusted index that measures the month-on-month change in the combined output of the region’s manufacturing and service sectors – registered 56.1 in May, broadly in line with April’s reading of 56.2. The upturn in business activity was sharp overall despite being the slowest for four months. Private sector firms in Wales stated that higher output was linked to greater client demand and a faster rise in new orders. The increase in activity was the second-steepest of the 12 monitored UK areas, slower than only London.

Welsh private sector firms registered a sharp increase in new business midway through the second quarter. The rate of growth quickened to the fastest for three months and was the second-steepest of the 12 monitored UK areas, behind only London. Companies stated that greater new order inflows stemmed from stronger client demand.

At the sub-sector level, the upturn was supported by a stronger increase in new manufacturing sales.

May data signalled further upbeat expectations regarding the outlook for output over the coming year among Welsh private sector firms. That said, the degree of optimism slipped to the lowest since the initial stages of the pandemic in March 2020. Positive sentiment was dampened by concerns regarding the impact of inflation on domestic and foreign client demand.

The level of confidence was lower than the UK average and among the weakest of the 12 monitored UK areas.

Welsh private sector firms recorded a solid expansion in employment during May, albeit the slowest in 2022 to date. Companies stated that higher staffing numbers were linked to a further uptick in client demand and new business.

The pace of job creation was among the slowest of the 12 monitored UK areas, however, faster than only Northern Ireland and the North East.

The level of outstanding business at Welsh private sector businesses fell for the first time since early-2021 in May. Backlogs of work decreased only marginally, but continued the trend of easing pressure on capacity seen since January.

Wales, the East of England and the North East were the only monitored UK areas to record a decline in unfinished business in May.

May data indicated a further substantial increase in input prices across the Welsh private sector. Cost burdens rose markedly amid higher fuel, energy, material and wage expenses. The rate of cost inflation was the steepest in the series history, and the fastest of the 12 monitored UK areas.

Average output charges rose markedly in May, as the rate of inflation accelerated to reach a new series high. The hike in selling prices was widely attributed to the pass-through of higher costs to clients. In line with the trend for input prices, the rate of charge inflation was among the fastest of the 12 monitored UK areas, slower than only Northern Ireland.

The uptick in output charges was driven by the Welsh manufacturing sector. 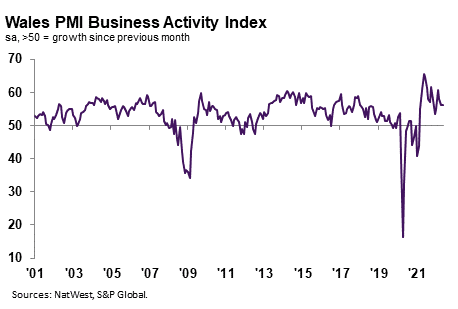 “Welsh businesses continued to signal sharp upturns in output and new business in May, in contrast to a loss of growth momentum across the UK as a whole. Client demand strengthened despite marked increases in selling prices and reports of supply-chain disruption.

“On the price front, input costs rose at the steepest pace on record as energy, fuel and material expenses soared. Notably, the rate of cost inflation was the sharpest of the 12 monitored UK areas. In response, firms passed costs on to their clients through the fastest increase in output charges in the series history. Inflationary pressures weighed on business confidence, as optimism at Welsh private sector firms dropped to the lowest since the onset of the COVID-19 pandemic in March 2020.”

Research to help to create a gender equal Wales