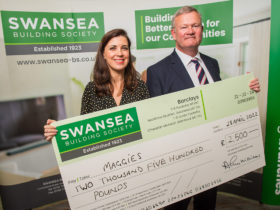 The iconic Cardiff Bay Run returns this Sunday 22nd May, with 5,000 people expected to participate.

Runners supporting the British Heart Foundation (BHF)’s race to the next life-saving breakthrough in heart and circulatory research will be able to take in all of Cardiff Bay’s most iconic landmarks, starting and finishing in Roald Dahl Plass and passing the Wales Millennium Centre, Mermaid Quay, the Pierhead Building, Senedd, Porth Teigr and the Cardiff Bay Barrage.

Among the participants fundraising for BHF Cymru is 9-year-old Ollie Banks from Pontypool. Ollie will be running in the Children’s Future Challenger 1 mile race, supported by his proud parents Kirsty and Steve, and his big brother Jack. Ollie has a condition call Ebstein’s Anomaly, which means the valve which directs blood through the right side of the heart doesn’t work properly.

Ollie says: “My heart has a ‘glitch’ that is changing as I grow, and it means that I will need an operation to fix it. I run to keep my heart healthy and happy.  I want to help all the heart doctors learn new ways to fix broken hearts and be the best that they can be in helping children like me.”

Ollie raised £900 running the children’s mile as part of the Cardiff Half Marathon in March, £100 for every year of his life, and he’s set a target of £1,000 for October’s event to celebrate his tenth birthday.

You can support Ollie at www.justgiving.com/fundraising/Oliver-Banks6

Phil Fiander, 65, from Abercarn, who completed the virtual and in-person Cardiff Half Marathons was inspired to support BHF after his brother Dave survived a heart attack at the age of 57, almost four years ago.

Phil says: “My brother Dave is not a smoker, but has the occasional drink, plays golf and has been active all of his life. We did not expect him to have a heart attack, and we are glad that he survived when many others don’t, so I wanted to raise some money for a very important cause.”

Phil’s fundraising page is at www.justgiving.com/team/RunningwithDave

Dexter Ealing, is originally from Birmingham, and now lives in Rumney in Cardiff. He says his first 10k will be a huge challenge for him, but he’s doing it to fulfil a promise he made to this mother before she passed away. His brother Spencer, a professional YouTuber, will live stream on social media to raise additional funds.

Dexter adds, “Last year I took up the gym to help me through the pain of losing my mom to a cardiac arrest and multiple heart attacks. A year or so before that my dad was also given a 20% chance of survival following a cardiac arrest, thankfully he is still here. The most I have ever ran is 5k so this will be a massive challenge for me, but I promised my mom I would always make her proud and I am determined to complete this run in memory of her. It won’t be easy, but she will get me through it.”

Spencer will live stream in support of Dexter via the Twitch social media channel at www.twitch.tv/ahugegorilla. Dexter is fundraising at www.justgiving.com/fundraising/dexter-ealing

Set in the heart of Cardiff’s historic Bay, the event is a flat, fast and friendly event for all ages and abilities, which attracts some of the UK’s top athletes as well as enthusiastic amateurs. A series of Junior Races give budding athletes and their families the chance to absorb the race day atmosphere, with fancy dress very much encouraged.

Nikki James, BHF Area Fundraising Manager for Wales and Northern Ireland says: “We are so grateful to everyone taking part in Cardiff Bay 10k in support of the BHF.

“In the last 5 years [2016-2021], we’ve funded £9.5m worth of research in Wales, supporting the work of 64 research staff. Today in Wales around 340,000 people are living with the daily burden of heart and circulatory diseases and dozens of families will lose loved ones to devastating heart diseases.

“With donations from the public, the BHF funds ground-breaking research that will get us closer than ever to a world free from the fear of heart and circulatory diseases, and a world of cures and treatments we can’t even imagine today.”