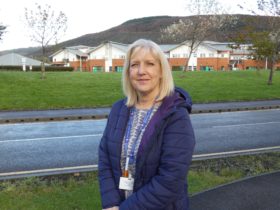 New app will help people with diabetes manage their condition

An ambitious hospital team reached new heights in their quest to help a homeless shelter in Wrexham.
Seven hospital staff from the private Spire Yale Hospital in Wrexham climbed 1,085 metres to the top of Wales’ highest mountain, Snowdon, to raise £800 for the Tŷ Nos hostel.

The 16-bed shelter, in Holt Road, is so busy that almost every night it has to turn desperate people away with nowhere else to turn.

The team’s donation has helped to replenish vital supplies and includes two new beds, bedding, mattresses and duvets which were purchased at heavily discounted costs thanks to the support of local businesses.

Among the team was operating department practitioner Catrin Stace-Jones and deputy theatre manager Lindsey Edge-Smith. They were also supported by volunteers from the shelter who completed the same climb on a different day.

“It was hard going. We had glorious weather and the views were beautiful but it was tough,” said Catrin, who grew up in Coedpoeth but now lives with her husband in Borras.

“It’s a good old climb and none of us have done anything like this before. We trained for about six months beforehand doing walks and going to the gym. It took us three hours to go up and two hours to come back down.

“Luckily, we were all fairly fit and prepared well. We pulled together and if someone was having a bit of a struggle we all waited together so nobody was left behind.”

Tŷ Nos provides more than 5,000 overnight stays a year and is a vital resource for struggling men and women of all ages, helping to save countless lives.

Open from 8pm until 8am, there is rarely a spare bed at the shelter, which has been open for ten years, and volunteers are often forced to make the heart-wrenching decision to turn people away when it is full to capacity.

“The shelter doesn’t receive much in the way of funding and relies on donations,” explained Catrin.
“It’s very rewarding to see the amount of difference we’ve made. Some of the beds were falling apart and Andrew Edwards, the shelter manager, has been so grateful.

“It’s nice to be able to make a difference and help people. People only think of the homeless at Christmas but there are people living on the streets every single day.

“There are more and more people made homeless every year – it’s not getting any better. There are more people finding themselves in unfortunate situations. If we can support them in some way we can make a difference.”

Congratulating the Spire Yale team on their success, shelter manager Andrew Edwards, who also climbed Snowdon, said: “Everyone at the shelter is so grateful for Catrin and her colleagues for their contribution which has made a big difference to our work.

“We don’t receive any income and it’s saved some of our budget which means we’re able to spend the funds we have on other things.

“It’s free for people to come here but we have to rely on people for donations of food and toiletries.
“We have 16 beds and demand has been really high this year. We’re full most nights and sometimes we can turn up to six or seven people away, especially in the winter.
“Every little bit helps.”

Despite such a steep challenge, Catrin says she has not lost her enthusiasm for fundraising and is already planning her next exploits which are even more adventurous.

“It’s nice to give yourself a challenge every now and then,” she said.

“Lindsey and I are now thinking of doing the Welsh Three Peaks next June in aid of the shelter.

“I’m also planning on doing another Christmas stocking collection to make sure everyone at the shelter receives a festive gift so we’ll be collecting toiletries and men and women’s gifts soon enough.

“I try and do what I can to help and Andy is always very grateful,” she added.

She said: “Climbing Snowdon is no easy feat and I take my hat off to Catrin and Lindsey and everyone in the team for their energy and drive and the effort they’ve put into their training.

“Spire Yale is part of the community and I’m very grateful to the team for supporting local causes which benefit local people. It is tragic so many people continue to live on the streets of Wrexham and anything we can to help increase resources at this fantastic shelter and ease the burden on volunteers is well worth the effort.”