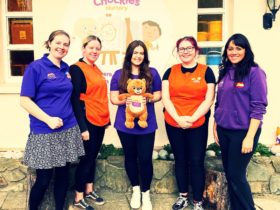 In just three months, the B Active programme has attracted 700 new participants, providing young people in Newport with regular access to sport. This early success was celebrated just yesterday, Tuesday 31st July, at the inaugural B Active summer showcase event. Taking place at Newport’s renowned International Sports Sentre, over 200 young people and volunteers came together in a celebration of sport and community.

The summer showcase kicked off with an 18-team football tournament, a selection of fitness classes were available for young people; there was also a dedicated female zone showcasing poundfit, Zumba and spin classes. Newport City Radio was in attendance providing the soundtrack to the afternoon, as well as offering DJ and MC workshops in-between activities, which was a popular addition.

The B Active programme was launched by Lucozade Ribena Suntory (LRS) and Active Communities Network (ACN) just three months ago, with the aim of improving the lifestyles of young adults aged 16-24 by providing access to sport and physical activity.

Through the B Active programme, young people are supported in leading informal sessions focusing on key health-related issues such as diet, fitness and mental wellbeing. The weekly sessions aim to bring like-minded people together and drive grass-roots participation in sport and exercise, helping to achieve the programme’s long-term ambition of engaging and inspiring young people through sport.

“It is brilliant to see a programme specifically targeted at this age group, and one that has expanded beyond the Newport area to give the young people a chance to interact with other communities and meet others on the B Active programme; we’ve had teams here from Cardiff, Blaenau Gwent and Caerphilly. It is also fantastic to see first-hand the collaboration between the partners – Lucozade Ribena Suntory and the ACN – offering non-traditional funding and support to get schemes like this off the ground.”

“I take part in the youth football sessions every Monday evening, but wanted to bring my team down to the tournament, not only to try and win, but because we want to meet new people and see what it’s all about. We’re here to build peoples’ confidence and develop as better people.”

“The purpose of the showcase is to bring together the B Active participants and entice newcomers to get involved with the sessions. We’ve had a really encouraging start in just a few months and to see so many of the young people get involved today is great. It’s only a matter of time before we see more people making positive changes in their lives through the programme and we’re grateful to have the investment from Lucozade Ribena Suntory to allow us to make this happen.”

B Active currently runs in five regions across the UK including Newport. Activity is being delivered five days per week, 50 weeks per year. The aim of the programme is to have 1,500 young people participating in new activity each year and 500 young people volunteering each year with 400 achieving accreditation in recognised qualifications.