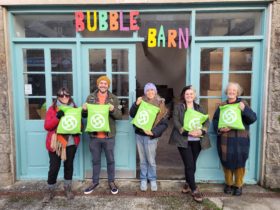 A Silicon Valley legend actively looking to invest in tech start-ups in Wales has shared his practical advice with companies on the lookout for cash at Digital Festival.

Keith Teare built and sold one of the first internet services providers in Europe, EasyNet, before moving to California and founding the $1.5bn valued RealNames Corporation, whose technology was embedded into the Microsoft browser.

“We’re a £200m fund and our remit is to send 80% of our funding to the regions, like Cardiff.  EasyNet grew from revenue and in 15 months made enough money to list on AIM and when BSkyB bought us we were worth $1bn, but venture capitalists wouldn’t give us any money because they heard my Yorkshire accent and my partner’s Plymouth accent. Fortunately, it’s not like that now for young companies.

“We get thousands of applications every year for funding but the single biggest thing missing thing in every application is vision.  What does this look like when it works? What are you aiming for? The second thing is execution. So if you can combine thinking big-vision with acting small-execution that persuades an investor that you can do this. And three – don’t get ahead of yourself, don’t think you’ve succeeded before you have.”

Now in its sixth year, Digital Festival – organised by Innovation Point in partnership with Welsh Government and headline sponsored by GoCompare – saw 2,500 delegates across two days hear tech leaders from across the globe tackle tomorrow’s big issues taking in mega-trends like 5G, AI, VR, IoT, GDPR, blockchain and big data, looking at how they affect day-to-day lives as we live, work and play.

Teare followed David Rowan, WIRED UK founding editor, on the main stage.  Rowan stopped in Cardiff on a global quest for models of innovation and told the audience: “things will never move this slowly again”.  He shared the six things he’s discovered that resonate with all successful innovators as empowering talent, building an ecosystem, importing a mind-set, enabling collisions, leveraging emerging tech and reframing your value. Rowan said of the latter:

“You thought you were a particular kind of business but if you break off a little bit and grow that, that could be where your future is at.  Qantas made a record loss – $5bn – a few years ago. They had one good part, the loyalty programme where they have half of the population of Australia in it.  So they now build businesses on top of this, coming up with new products and prototypes.  They’ve come up with a health insurance business, a golf club, a food delivery business and more.  It now accounts for 30% of the profits and by 2022 it’ll be bigger than the rest of the business.”

The second day of the festival saw an informative selection of interactive workshops, panels and keynotes for delegates to learn from and find their future in tomorrow’s digital world.  Paul King, Chief Security Officer, Cisco UK & Ireland, addressed the latest security threats and further events discussed recruitment in the digital age; the role of semi-conductors in the digital economy; connected healthcare; smart manufacturing; legaltech and regtech; 5G; chatbots; the future of agriculture; gaming and structuring teams in the digital age.

CEO of organisers Innovation Point, David Warrender, said: “Now in its sixth year, the Digital Festival has grown delegate numbers to well over 2,000 people with visitors from as far afield as the USA, Japan, China and Ghana.  We also present over 100 speakers from around the world.  Testament to this growth is our inclusion for the second year running in TechRadar’s ‘Top Tech Conferences: The Ultimate B2B tech events and show guide for 2018.’

“As well as Digital Festival, Innovation Point continues with its core work of helping tech companies to find growth funding in areas such as 5G, Cyber, and supports tech innovators and entrepreneurs within the Welsh digital economy with projects like the IoTA (an equity backed Internet of Things Accelerator) based at Barclays Eagle Labs, regular monthly Digital Tuesday meet-up events, and investor pitch opportunity events for our tech scale-up businesses to the London Stock Exchange and Digital Catapult.

“The tech market is competitive and global but Digital Festival continues to open up great opportunity for this region.  That’s a good story for us all.”

The first ever Top Women in Welsh Technology – an awards ceremony crowning the women driving the digital industry in Wales – was announced at the festival.  Following a public nomination process, judges chose from hundreds of women across sectors in Wales including females who’ve founded companies working worldwide, saving lives, creating careers, innovating and boosting the economy.

The Top Women in Welsh Technology are:

Headline sponsors GoCompare presented on its new GoFurther Academy and how it wants to bring new recruitment and skills opportunities. Lee Griffin, founder and president of GoCompare said:

“Digital Festival gave us a great opportunity to engage with the thriving tech community in south Wales and take part in valuable conversations around key industry areas such as machine learning, and recognising and supporting women in tech and skills development in the industry.

“We also couldn’t be happier to have launched our new skills initiative, the GoFurther Academy, and believe our significant investment will have long-term benefits for talent development, the economy and the growing tech community in south Wales.

“Over the following months our hope is to expand our partnerships with colleges, schools and universities in south Wales, many of which we were able spend time with at Digital Festival, to give opportunities to local talent, while continuing to invest in the great team we already have at GoCompare.”