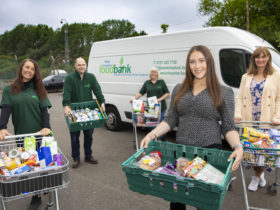 Kidney Wales has launched its inaugural awards, celebrating the shining lights of organ donation and those who have contributed to the treatment of kidney disease across Wales.

The main award of the night, the Kidney Wales Organ Donation Award, was given posthumously to Teddy Houlston, who in 2014 lived for 100 minutes and became the UK’s youngest ever organ donor. His parents were at the event in Swansea University to collect the Award on his behalf.

There was also an award for Mark Drakeford AM who as Special Adviser to Ministers, Health Committee Chair when an Assembly Member, and then Health Minister, was instrumental in bringing the new organ donation law into force.

“It would be impossible to understate the impact that Mark Drakeford has had on organ donation in Wales. The changes that he oversaw will have a long-reaching effect and save thousands of Welsh lives.”

The evening saw the launch of two awards in memory of two outstanding patrons of the charity: The Rhodri Morgan Fellowship and The Salaman Scholarship, both of which were awarded to Dr Richard Hain from Cardiff.

The Rhodri Morgan Fellowship is in tribute to the former First Minister of Wales, one of the charity’s former patrons, and will focus on one of his main areas of interest, ethics. The Fellowship, which was awarded to Dr Hain by Julie Morgan AM, will enable him to research and engage with others interested in the field of bioethics.

John Salaman was a trustee and transplant surgeon and The Salaman Scholarship, awarded by his wife Pat Salaman, will enable the winner to travel to other parts of the world to learn more about renal excellence in other hospitals.

There were awards for five Kidney Wales Patient Champions in the Medical Health Professions. These were won by Eiddwen Glyn, Sharon Warlow and Kym O’Connor from University Hospital Wales, Antonia Beteta, and Toni Hamlett from Bangor Alltwen.

“The work that these people do day in, day out, is exceptional and invaluable in improving the lives of people in Wales living with kidney disease. The men and women who work in these centres regularly go above and beyond what is expected of them and it is a privilege to be able to thank them for their tireless contributions.”

“Having recently celebrated 50 years of Kidney Wales, it was entirely appropriate that we honoured the efforts of so many outstanding groups and individuals. There are so many inspirational stories out there and now we have a forum for sharing the work that is being done.”

The inaugural Kidney Wales Awards followed the launch of Swansea University’s Centre for Life Ethics and Organ Donation. The first of its kind in the UK, the Centre for Life Ethics and Organ Donation will be committed to the values of justice, dignity, respect and freedom – both intellectual and academic in bioethics in general, and specifically in relation to organ donation, bringing the value of human life and its care to the attention of the world.