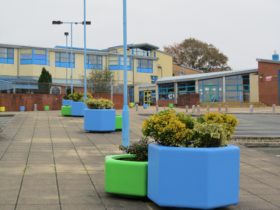 Torfaen residents asked for their views on education services

On Tuesday 24th May, 39 singers from Llandeilo Primary School will join with other pupils to form a choir of 2000 to perform at London’s Royal Albert Hall to honour the Queen’s Platinum Jubilee, the Commonwealth and the communities within it.

The concert, “It Takes A City” will highlight the importance of community, diversity and individuality amongst families across the world, which echoes the school’s philosophy.  Based on the African proverb “it takes a village to raise a child”, this contemporary tale will share the joys and challenges of community living, reminding us that a family is far more than those who live at home.

The evening will mark the world-premiere of composer Toby Young’s incredible “It Takes a City” commissioned by Armonico Consort & Orchestra.

Headteacher of Llandeilo Primary School, Mrs Karen Towns says “Our pupils have been given a unique learning experience which will provide inspiration for their future learning and create memories to last a lifetime. We are very proud to represent not only our town and County but also the Country as we are the only school representing Wales in this very special event”

Llandeilo itself is no newcomer to memorable music events, the 20th annual  Llandeilo Fawr Festival of Music is back on the books this year having been put aside by Covid in the past two years. This invitation is a wonderful example of what can happen when a small town like Llandeilo achieves artistic prominence by consistently hosting a successful Festival involving schools and other organisations in the town.

Julia Jones, Artistic Director of Llandeilo Fawr Festival of Music noted that “We attach great importance to this outreach branch of the Festival and we are extremely grateful, not only to Armonico Consort, for extending the invitation to Llandeilo Primary School, but to the school’s Head and Staff, for their co-operation and support, and to the children, for their aptitude and enthusiasm which deserved the invitation in the first place.”

This opportunity is also a direct outcome of the strong links forged between the Warwick-based Armonico Consort Academy and the Llandeilo Fawr Festival of Music. This link is further strengthened with the consistent appearance of the Academy in the Llandeilo Festival itself.  Armonico Consort will be taking part in the final concert of this year’s Llandeilo Music Festival, which will also be held in celebration of the Jubilee.