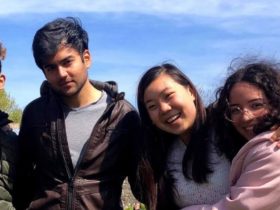 A Barry-based business woman is celebrating after being recognised for her work within the technological industry in Wales at the sixth annual Digital Festival in Cardiff.

Sarah Edwards, who is the Managing Director of Capital Networks Solutions, has been working within the IT industry for 17 years and was recognised for her outstanding efforts within IT and technology industry.

The first ever Top Women in Welsh Technology – an awards ceremony crowning the women driving the digital industry in Wales – was announced at Digital Festival on Monday (21stMay).  With just 15% of the people working in STEM roles across the UK female and only 5% of leadership positions in the tech industry held by women, Innovation Point, organisers of the festival, believe sharing the stories of female’s leading the way will inspire others to follow.

Following a public nomination process, judges have chosen from hundreds of women from across Wales and across sectors including females who’ve founded companies working worldwide, saving lives, creating careers, innovating and boosting the economy.

Speaking about the recognition, Sarah said:

“To be recognised in the same category as so many women that I admire is very humbling and to be able to showcase the work that myself and my colleagues have been involved with over the last seventeen years is very rewarding.”

In a very competitive, traditionally male-dominated market Sarah actively promotes opportunities for woman leading to a near 50/50 ratio within the company’s cyber team.

“It is absolutely vital to be recognising the significant achievements made by women throughout Wales in the technology sector as I hope that it will demonstrate the vast array of opportunities open to women, not necessarily in a technical role.”

Being named one of Wales’ Top Women in Welsh Technology comes after Sarah was shortlisted for Leader of the Year at the Wales Technology Awards and was recognised for leading Capital Network Solutions through a period of significant growth, which has seen the business establish itself as one of the most successful and well respected cyber security companies in the UK.

CNS has recently established itself as one of the biggest certification bodies in the UK after certifying its 1000th Cyber Essential customer at the end of last year. Completion of the Cyber Essential scheme, along with the recent changes announced in the European Data Protection Regulation, makes a future where businesses are protected against cyber threats entirely possible.