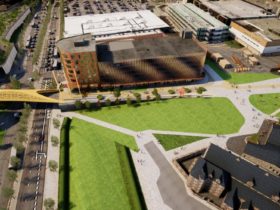 Beach-goers in Swansea are being urged to use purpose-built bins designed for disposable BBQs after a young girl suffered severe burns to her feet.

Swansea Council has condemned the actions of individuals who buried a disposable BBQ in the sand on Swansea Bay beach, which was then walked on by a seven-year old girl. The child is now waiting to see if she needs skin graft surgery

Simi Adenaike, 7, and her mother Alex Adenaike from Mt Pleasant, along with other family members, had not been on the beach long when their day out turned to horror.

Simi’s mum, Alex, said: “We had only just arrived at the beach and were looking forward to having some fun. The children started playing almost immediately and had been running around in the sand. We heard a horrifying scream and my daughter came running back.

“She was in so much pain, she was unable to tell us what happened. Eventually we realised one of her feet was very red and blistered. We had some help from some other visitors on the beach to cool down the burn with water and we got her to hospital immediately.”

The family had discovered a disposable BBQ buried in the sand and were told by witnesses that a group had been seen burying the foil tray before leaving.

Alex’s mum said: “This is so upsetting and my daughter is now needing further treatment and possibly a skin graft.

“The Council has made the effort to install disposable BBQ bins and there was one not far from where the BBQ had been buried.”

Cyril Anderson, Cabinet Member for Community said: “This incident is horrendous and we wish Simi and her family all the best as she receives medical treatment.

“The dangers associated with discarding or leaving disposable BBQs on our beaches are well known and that’s why we have gone to the trouble of installing fifteen bins at all of our beaches.

“Anyone who thinks that it’s OK to bury BBQs or any other waste in the sand on a day out is simply irresponsible and thoughtless to the injuries they can cause to beach users.

“BBQs and charcoal retain their heat for hours after they’ve been used and can cause serious burns for people who accidentally step on them.”

The Council’s beach cleansing teams clean the beaches every morning during the summer and throughout the day. They are often supported by volunteers who also want to see pristine-clean beaches. Additional teams also target littering hotspots at the busiest times.

A list of beaches where the disposable BBQ bins are located: