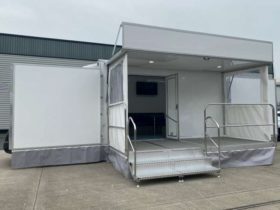 A children’s charity has revealed that more than 140 referrals were made to authorities over child neglect concerns in North Wales over the last year.

According to NSPCC Wales Appeal Board Chairman Alan Peterson, it is contacted on average 55 times a day by adults from across the UK worried about neglect.

The charity’s helpline hears from concerned adults with reports ranging from children being left unsupervised or with inadequate clothing, to being screamed at or living amongst mouldy food and animal faeces.

Many of these concerns were so serious that they were referred to agencies including local authorities and the police.

Shocking statistics show 2,874 sexual offences against children aged under 16 were recorded by police in Wales last year. Nearly 6,000 children are in care and 2,690 are on the child protection register.

Accepting a £1,990 cheque from Care Forum Wales, which represents nearly 500 independent social care providers, he said the need to put an end to the suffering of vulnerable young people is as great as ever.

The money was raised at the Wales Care Awards, known as the social care Oscars, which are organised annually to recognise the skill and dedication of the sector’s unsung heroes and heroines. In addition, individual members of Care Forum Wales are raising thousands of pounds for the charity.

Thanking social care workers who stepped up to support a three year £3 million NSPCC Wales fundraising appeal he said: “It’s our sad experience that when our teams visit a school to talk to pupils about the vital work we do, we find that on average two children in every classroom have suffered abuse or neglect.

“Our role has never been more crucial. We advise and reassure frightened young people, offering a way out of what can seem to them to be a downward spiralling, inescapable situation.”

During the festive period extended family members often get in touch with the NSPCC after spending more time with a young relative and becoming concerned for the child’s welfare.

To raise awareness of child neglect – the most common type of abuse affecting children in the UK – the NSPCC has launched its ‘Light For Every Childhood’ Christmas Appeal.

The appeal is calling for donations to the NSPCC Helpline – which is open throughout the holidays – so they can answer more calls and help children suffering neglect both at Christmas and all year round.

Care Forum Wales chairman Mario Kreft MBE said: “Having seen the figures about the abuse and neglect of children across our nation and having been astonished and horrified by the facts, it’s clear we need to do all we can to make children in our community safer.”

“NSPCC Wales has been our nominated charity for 2018 and I would like to thank all our members across Wales for all their own brilliant fund-raising efforts and I know that individual members of staff at those organisations have also been busy.

“I’d also like to reveal that NSPCC will also be our nominated charity for 2019 and I am confident we will be able to raise significantly more thanks to huge reach of social care in Wales which employs tens of thousands of people across the country.

“We urgently need to highlight the plight of children suffering unseen without hope of refuge or succour. For their sake it’s essential the public rally firmly behind this cause.”

Mr Peterson said the relationship with Care Forum Wales was a strong one, much welcomed by the NSPCC in Wales.

He said: “The care ethos is common to both our organisations and goes to the root of what we are about. Whether it’s caring for young people or elderly, the professionals and volunteers in both environments are selfless in their desire to help.”

NSPCC Wales experts visit schools regularly to educate and communicate with children about the charity’s work and reach out to those who may not otherwise know where to turn.

In the last 12 months, via its Speak Out and Stay Safe campaign, volunteers and staff visited 485 schools in Wales and delivered important information about NSPCC services to 72,284 children. The eventual aim is to visit all Welsh schools.

Mr Peterson said: “We continually encounter young victims who may be experiencing problems at school, at home or in the wider community.

“Abuse takes so many different forms and affects children from all backgrounds. We’re not just talking of physical violence, but emotional torment and neglect.

“Neglect is an increasingly serious issue which can be the result of parents suffering from something like substance abuse, alcoholism, stress or sinking under financial strain.

“We regularly encounter youngsters facing the onerous task of having to care for their siblings because their parents cannot cope or have abandoned them. We have support programmes to help parents as well as children.

The advance of the internet and social media has also increased dangers facing children and escalated the potential for abuse.

Mr Peterson said: “Technology has given bullies more ammunition with which to prey on their victims. It used to be that a child being bullied in a school playground, for instance, could at least get some respite at home, but now a bully can invade that home via texts and other forms of social media messages. A child can be targeted by classmates even when out of school, from the moment they wake on a Saturday morning until bedtime on a Sunday evening.”

Sexual predators have become adept at online grooming of young innocents, and children risk stumbling upon or actively seeking out unsuitable material posted on the internet. NSPCC Wales research found almost one in three youngsters have seen something worrying or nasty online.

The charity wants to raise at least £1m over each of three years to fund key areas of its work including the Speak Out and Stay Safe campaign.

Other priorities are to maintain and improve advice and therapy services via the charity’s three bases in Wales at Swansea, Cardiff and Prestatyn; and continued funding of Childline, a free, confidential advice service for troubled children to chat with an expert counsellor via the phone or email. On average a UK child contacts Childline every 25 seconds.

The NSPCC relies almost entirely on donations. If funds dry up, cuts become necessary which could mean closure of some branches.

He said: “Our service centres in Swansea, Cardiff and Prestatyn, are fantastic. We simply cannot put them in jeopardy. That’s why I set this fundraising target, to ensure the work they undertake continues for future generations.

“I’ve seen first-hand how effective the NSPCC child recovery strategies can be. Given the resources we can put an end to abuse, assist children to recover from their ordeals, often help bring families back together and restore children’s faith in themselves and society as a whole.”

Care Forum Wales council member  Brian West, who was at the cheque presentation ceremony, said the continued work of NSPCC Wales is essential to the wellbeing of many thousands of young people.

He said: “Care Forum Wales is encouraged by the generosity of our members in raising £1,990 for our chosen charity, the NSPCC, who carry out this important role in giving children in Wales a voice. This includes providing support to those who have suffered abuse or neglect, encouraging them to speak out and not suffer in silence.

“The mission statement of Care Forum Wales is ‘Taking care of Wales’, which includes both adults and children. So we are delighted to present this cheque to the NSPCC to help it continue this vital role in safeguarding our children.” 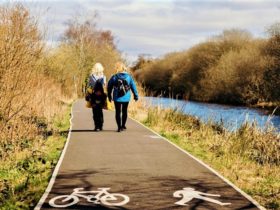