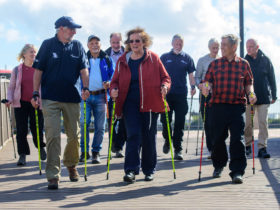 Who doesn’t like to win a prize? But it’s a ‘big prize – big cost’ for those goldfish handed out to someone as a prize in an unsuitable plastic bag for long durations – most likely suffering from shock and gasping for oxygen.

Sadly this outdated practice is still happening today with the RSPCA calling on the giving of pets as prizes to be banned. The charity is urging local authorities across Wales to act to protect these animals that otherwise will often suffer as a consequence of being given away.

So far five local authorities in Wales have acted – with the Vale of Glamorgan the most recent to ban the practice.

Reports have stalled since coronavirus restrictions began and shows stopped taking place – but the RSPCA fear this will change this summer as fairgrounds and fetes return properly for 2022.

Since 2015, the RSPCA has had 147 calls across England and Wales about goldfish and other aquatic animals being given as prizes – with a small number of these calls coming in over the past two years.

However public opinion proves to be strong on the issue as last year more than 9,000 RSPCA supporters called upon their local authority to make a change and stop this practice from happening on their land.

“We’re delighted that nearly a quarter of local authorities in Wales have banned the practice on their land already – but RSPCA Cymru will keep campaigning until this practice is consigned to the history books.

“Animal ownership is a big responsibility – and goldfish shouldn’t be acquired via a spur-of-the-moment game. Goldfish are easily stressed and very often fish that are won as prizes suffer miserably from shock, oxygen starvation or die from changes in water temperature, and many may die before their new owners can even get them home.

“They’re misunderstood pets – as they can make great companions; but can actually be challenging to look after and new owners must do their research before they acquire the fish, not afterwards. When bringing a fish home for the first time, it’s important to set the tank up at least two weeks in advance to make sure it’s all running smoothly, and this just isn’t possible for someone who’s won a fish without being prepared for it.”

Ruba Sivagnanam, the Vale of Glamorgan Council’s Glamorgan Council’s cabinet member for community engagement, equalities and regulatory services, said: “Giving animals away as prizes is completely inappropriate and, as a council, we support the RSPCA’s stance that this practice should be stopped.

“To that end, we do not allow any event that offers animals as prizes to take place on council land.

“The council takes animal welfare very seriously. I would discourage anyone to become involved in events where animals are prizes. Please consider reporting the matter to the RSPCA.”

RSPCA Cymru hope more local authorities will follow this summer. Supporters are being urged to take the action on the RSPCA website which will let your local councillor know that pets as prizes are a no-win situation. The RSPCA hope this will continue to make the case to the Welsh Government that pets being given away as prizes should be banned outright through national legislation.

In October 2019, the Welsh Government said “a separate piece of work” would happen on pets as prizes, indicating there is governmental will to act – but, as of yet, no further action has been taken.

RSPCA Cymru hopes the Welsh Government will work with local authorities and other stakeholders to reduce the number of pets such as goldfish being given away at fairgrounds and fetes, encourage local authorities to act themselves and – ultimately – progres a national ban on this activity.

The animal welfare charity previously worked closely with campaigner Holly Homer, who raised awareness of this issue in Wales and submitted a petition calling for a ban to the Welsh Parliament’s Petitions Committee. Her petition raised 2,416 signatures and received attention from Members of the Senedd and the media .

Last year 9,192 RSPCA supporters called upon local authorities across England and Wales to make a change and stop this practice from happening on their land.

Chris added: “There’s huge momentum behind the RSPCA campaign – last year thousands of people supported us in this campaign and we’re over the moon to see nearly a quarter of local authorities in Wales already pass the RSPCA’s notice of motion on this issue.

“With new Councillors in place across Wales following May’s election, we hope many more will join them to make our counties even safer places for animals to live. We hope this summer our supporters will help us  spread the message further and encourage local authorities to ban the giving of pets as prizes on their land.

“But ultimately, we need to see action nationally too. The Welsh Government suggested in 2019 they’d be keen to look at this issue – and we hope the momentum behind local bans on Council land will demonstrate the need for a nationwide ban too, on all land.”