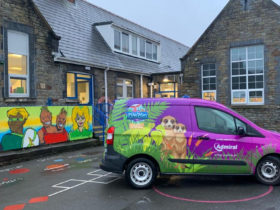 Just 10 days in a hospital bed can leave some older patients so weak they will lose the ability to look after themselves independently.

So while a medical issue might have been solved during their stay, they could be left with a legacy of problems including not being able to walk to the toilet or even make a cup of tea.

This is why physiotherapists at Gorseinon Hospital in Swansea are part of a new campaign to get patients moving as soon as it’s safe.

But traditional exercise programmes are not the only option for a very important reason.

“But people are more likely to engage in an activity than an exercise programme.”

Staff and patients are now taking part in the Love Activity Hate Exercise? campaign from the Chartered Society of Physiotherapy, which designed the programme to counter the negative feelings some people have about exercise.

A successor campaign to #EndPJparalysis – designed to get patients up, dressed and moving – Love Activity Hate Exercise? and the physiotherapists delivering it want to find the activities that will grab patients’ interest and keep them motivated.

Patient suggestions have now led to alternative activities being organised within the 36-bed hospital, which provides assessment and reablement for mainly older patients admitted following falls, fractures or surgery in Morriston and Singleton hospitals.

These range from doing a puzzle, to exercise to music classes, to gardening.

The idea is simple: patients who are up, dressed, active and engaging with staff and each other will get better quicker and will return home stronger and more able to look after themselves.

“We want to get them out of their bays and out of the hospital mentality,” said Catrin.

“Patients can lose their routine and their sense of themselves while they are in hospital.

“And if they stay in bed for longer than 72 hours their muscles start to weaken. After 10 days patients are completely deconditioned. They will have lost strength throughout their body. That could make a difference between them being up and active before to not being able to get out of bed. It affects some people so much that they can’t get to the chair or get to the toilet.

“The benefits of activity for the patient are that it keeps them healthier for longer, they have a better quality of life and are less reliant on the NHS and care workers.”

Margaret Davies, 84, from Swansea, is among the patients who have started looking after the hospital garden as part of Love Activity Hate Exercise?

Previously mobile, she has had a long hospital stay following an operation on her spine and is currently using a wheelchair.

“I was living independently before and I want to get back to that,” she said.

“I didn’t have carers or anything, but my family is very good.

“This campaign is good because it gets you out of the ward where it can be very boring.”

Rita Clarke, 63, from Swansea, suffers from chronic conditions and has had her left leg amputated due to ulcers.

But the keen gardener, who has grown fruit, veg and flowers all her life, is determined to retain her independence and has seized the opportunity to help out in the garden.

“If I am able to do an activity, I will do it. Gardening is my first choice,” she said.

“I am very determined. I won’t let anything stand in my way.”

The gardening group, who work from their wheelchairs, has weeded the large raised bed in the hospital garden and planted geraniums and celosia to add a splash of colour.

The work has given Ernest Harris, 72, the first chance to get outside in four months.

“This is the first time I have been out since the end of March,” he said.

“I’ve gardened all my life. It was my hobby.”

Isobel Morgan, 73, added: “On a beautiful day there’s nothing that we can appreciate more than a garden full of flowers.”

Catrin explained that support for patients does not stop once they leave hospital.

“There is an outreach service with the community physiotherapy service because while they might have practised getting up a step in hospital, they haven’t tried their step at home, so we will go out and support them to do that.

“We are saying to people that they don’t need to be in hospital to get better, you will do better in your own home and we can do that in a supportive way.”

Love Actvity Hate Exercise? is due to run until October 1, which is the International Day of Older Persons.