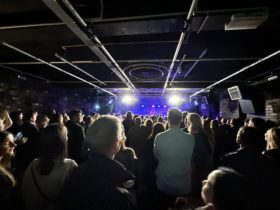 The decision is subject to scrutiny by the Police and Crime Panel for South Wales, which will meet on Tuesday November 3rd to consider the Commissioner’s decision to name Mr Vaughan as the “preferred candidate” and to decide whether to endorse it.

The need to appoint a new Chief Constable follows the appointment of the current Chief Constable, Matt Jukes QPM, as Assistant Commissioner of the Metropolitan Police – which Mr Michael described as “an enormous compliment to the reputation that Matt Jukes has earned in his decade as a Chief Police Officer in South Wales and an endorsement of the reputation of the South Wales Police team as a whole.  We all share in pride at Matt’s appointment to such a significant role on the national stage”.

The vacancy for a Chief Constable was widely advertised across policing in England and Wales and drawn directly to the attention of all eligible officers of senior rank.  After the closing date in October the Commissioner invited three highly experienced and well qualified applicants – each currently serving as a Deputy Chief Constable – to enter the appointment process.

Mr Michael said: “Deciding who will lead South Wales Police for the coming years to succeed Matt Jukes is the most important single decision that I have to take as the Police & Crime Commissioner and it is important not only for the police service but for all the communities of South Wales.

“The three candidates who were short-listed demonstrated high levels of competence and vision as they went through a grilling by three specialist panels and then a formal interview process in which I and my Deputy Commissioner, Emma Wools, were joined by four distinguished senior leaders from other agencies including Welsh Government and Local Government in Wales. Jeremy Vaughan came through all those elements of the process as being the stand-out candidate.

“Despite the difficulties created by an unremitting period of tough financial cuts – and the financial challenges have not gone away – Matt Jukes has continued the journey aimed at developing South Wales Police into one of the leading forces in the UK, with a balance of high performance in responding to crime and supporting victims while intervening early and working with partners to prevent crime in the first place and create safe, confident communities across South Wales.

“In recommending Jeremy Vaughan for appointment, I am confident that we have the right person with the right skills and commitment to lead South Wales Police through the challenging times ahead and to build on the firm foundations laid by Matt Jukes in recent years.

“Such an important appointment needs a stringent scrutiny process to provide public assurance of the validity of the appointment and the process I put in place expands on the process that was so effective in the appointment of Matt Jukes three years ago. The process had a focus on scrutiny and challenge, involving expert panels which questioned the candidates on police ethics, partnership working in the public sector – particularly with our partners in local government – and also covered work with the wider criminal justice system and with the voluntary and community sector.

“That process was followed by a formal interview panel on Friday, for which I was joined by highly experienced senior leaders from other agencies to interview the three candidates across the range of skills required to meet the role profile of Chief Constable and the interview panel was also provided with summary reports from the various earlier panel sessions. The interview panel recommended unanimously that I should proceed to make the appointment.

“I will appear before the Police and Crime Panel on 3rd November along with Jeremy Vaughan and my Chief Executive, Lee Jones, who will explain the process that we have followed and provide a written report from the Independent Assessor whose role was to observe and scrutinise the integrity of the appointment process and ensure that it was fair and transparent.  The Panel will then hear from the preferred candidate and will be able to ask us any questions they wish to ask.

“I am grateful to all the people who gave of their time to be involved in this process.  It illustrates the importance of the role that those on the panel represented such variety of disciplines and agencies. They helped to tease out the way in which each candidate would serve the public across South Wales and provide leadership in the role of Chief Constable, maintaining our progress in preventing crime and harm, protecting our communities and responding to crime, disorder and exploitation whenever they happen.”

“It has been privilege to work alongside Matt Jukes as his deputy and with the support of the Police and Crime Panel I look forward to leading a fantastic team of officers and staff who are so committed to keeping South Wales safe.”