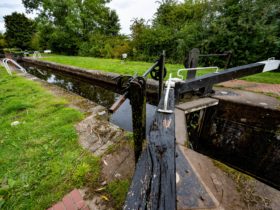 The opening day of the 2018 Royal Welsh Show welcomed some cooler weather and huge crowds to the showground in Llanelwedd, Builth Wells.

Addressing visitors at this morning’s (Monday 23 July) opening ceremony, the 2018 President, Mr Tom Tudor, explained how proud he was to be president of the society during the Montgomery Feature County year.  “I believe that the Royal Welsh Show highlights all that is good in Welsh agriculture and much more… our language, our culture and of course, our outstanding Welsh atmosphere. There is no better show in the world, and it makes me proud to be a farmer, and part off the Royal Welsh Team.”

The show was officially opened by John and Beryl Vaughan, from Llanerfyl, Welshpool, Powys. Both John and Beryl have a long association with the society, having both met whilst working at the show back in the mid-70s. Most recently, alongside their extensive lists of other commitments, John is the currently the chair of the societies finance committee and a member of the board of directors. Beryl is the senior steward in the shows press centre and, along with John, have been loyal and dedicated supporters of the society and the Montgomery Feature County for many, many years.

During their address, John and Beryl both praised the society’s young members. “Today’s younger generations of farmers are well educated, optimistic, hardworking and shrewd business people who readily engage new technology. They are prepared to take their businesses in a different and sometimes new direction, if needed” said John.

“We are extremely pleased that the Montgomeryshire advisory committee have decided to raise funds to put towards a new permanent building for the young members of the society. They are our future and we must support them in our efforts to ensure we have a show that will be a huge success for years to come” added Beryl.

Following the opening the ceremony, saw the official opening of the some new stables for the society’s Equine Project by the President of Gwent (2015), Mr David Morgan and Carmarthenshire (2017), Mr Brian Jones.

Chair of Council, David Lewis explained “The society recognises that our site is one of our most important assets. Consequently we are committed to a clear plan of investment to ensure that this iconic site continues to provide a fantastic facility for our own and many other events.

“This Investment is underpinned by one of our most important pillars of success, the feature county structure. We are delighted that both the 2015 and 2017 feature counties chose to support the equine project that, together with some society funds, will result in a £1 million investment in the Equine facilities here onsite.”

The equine project comprises of a number of elements which, when complete, will see new stables, new display area, new parking on horse hill, new horse foreman’s hut and also an exercise arena next to the horse ring.

Alongside the competitions and excitement of the opening day, the show also serves as a neutral platform where business leaders, politicians and other influential figures can come together, and today was no different.

“The first day of the show always sets the scene for the rest of the week, and we are delighted to be joined by so many important individuals, all using the success of the society to engage with the rural community and champion the agricultural sector” commented John Davies, Chair of the Board of Directors.

“As always the society is proud to be able to provide an international stage for which it will play an instrumental role in formulating the future of the Welsh, and British, agricultural sector in these uncertain times.”