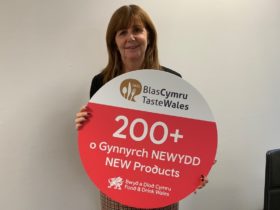 200-plus Welsh food and drink products as major event returns

A RISING Welsh whisky firm doing a roaring trade the world over is planning to open new sites in Llandudno and Swansea.

Speaking at a conference for the acclaimed 20Twenty Business Growth Programme at Holt Lodge in Wrexham, Penderyn Distillery boss Stephen Davies revealed the company will be expanding into other areas of the country in the near future.

Plans for Llandudno include a retail outlet, visitor centre and training hub for workshops, helping to spread the popular brand across the country, reaffirming its patriotic identity.

“We have grown to the point where turnover is around £11m and we employ 50 workers, so we are looking further afield,” said Mr Davies, Managing Director of the Aberdare-based range, which also includes Brecon Gin.

“Our customer base has also grown – Harrods, Asda, Tesco, Waitrose and other supermarket giants all stock our premium products – and venues including the Ritz and Savoy hotels in London.

“But our Welsh roots are so important to us; we started with no money for marketing but realised that if you don’t invest you have no future.

“We believe in the product and have a passionate team with a fabulous brand which tells a story that resonates with people, especially here in Wales.”

But it wasn’t always plain sailing, as Mr Davies admits.

“When we told people we were going to produce a premium whisky in Wales they thought it was laughable,” he said.
“There have been many over the years producing fake versions, but we are authentic and top quality, which won over any critics we did have initially.

“It was a brave and ambitious move and there was a lot of risk, but we have positioned ourselves well and appeal to a wide audience with our range.

“We are even the Prime Minister’s favourite tipple, so it shows we can appeal to all! We are not a novelty, we have a lot of credibility, and as we grow that grows as well.”

Mr Davies appeared alongside Professor Brian Morgan at the event.

Professor Morgan is founder of both the Penderyn Distillery and 20Twenty, and had some business lessons for those in attendance, many of whom plan to sign up for the popular programme which targets firms in firms in Flintshire, Powys and Wrexham and is up to 70% paid for by the European Social Fund via Welsh Government.

“The 20Twenty Programme will introduce you to all types of leadership, whether it be transactional, transformational or distributed, there are different levels of effectiveness,” said Professor Morgan, from Cardiff Metropolitan University.
“Good leadership is about taking people with you – as Stephen has at Penderyn – and achieving successful change under conditions of uncertainty.

“That is what a true leader does, and that is just one of the elements of the programme that would benefit you and your business, as well as being innovative, creative and having a sharp focus on the position, marketing and brand of your organisation.”

“It was an incredible night, I think everyone in the room took something from it,” said Gwenllian.

“Both Brian and Stephen have so much knowledge and experience of business and leadership, it was fantastic to get a taste of that, particularly the continued growth of Penderyn.

“Those in attendance thoroughly enjoyed it and I would encourage others to join us by either signing up to the programme or attending one of our events – you can not fail to be inspired.”

The 20Twenty Business Growth Programe offers a range of recognised leadership qualifications from Level 3 through to Level 7, all of which are accredited by the Chartered Management Institute (CMI).