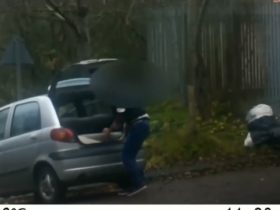 RCT Council will begin a scheme to repair and rebuild three river walls near Cross Street and Ynys Street in Ynyshir from Monday, in order to permanently rectify the damage caused during Storm Dennis.

During the unprecedented weather in February 2020, the river walls at this location suffered damage, and emergency repairs were initially undertaken in response to this. The upcoming scheme, starting on site from Monday, July 12, will deliver more permanent repairs and will improve the resilience of the walls, which retain the highway, while also incorporating drainage improvements.

Remedial works will include site clearance, reconstruction of sections of the retaining and parapet wall, repointing work, replacing several lengths of the masonry coping and the installation of flap valves to existing drainage outlets.

The Council has appointed Walters Ltd as the contractor responsible for carrying out the work, which will last approximately 12 weeks. The contractor has delivered letters to residents explaining the nature of the works.

Throughout the works the lane to the rear of Ynys Street, which runs adjacent to the river, will be closed to all vehicles. All pedestrian accesses – including the rear lane and the footbridge leading to Standard View – will remain open.

The majority of the work is being carried out through Welsh Government funding secured by the Council, which is earmarked for Storm Dennis repairs in Rhondda Cynon Taf. One specific element of the scheme – the installation of flap valves at a cost of £15,000 – is funded through an 85% contribution from a Welsh Government Minor Works grant in relation to flooding.

Councillor Andrew Morgan, Leader of Rhondda Cynon Taf Council and Cabinet Member with responsibility for Highways and Transportation, said: “The Council is continuing its repair and replacement of infrastructure across the County Borough some 18 months after Storm Dennis hit, having made it clear that it would be dealing with the substantial damage from this unprecedented event for some years to come. The Council will continue its commitment to seeking funding for these repair schemes in our communities.

“The upcoming work in Ynyshir will provide a permanent solution for damage to the river wall near Cross Street and the rear lane adjacent to Ynys Street – after temporary work was initially carried out. This is the latest river wall repair scheme following Storm Dennis, with works delivered at multiple locations including Berw Road in Pontypridd, Blaen-y-Cwm Road in Blaencwm, A4054 Cardiff Road in Treforest and near Cardiff Road in Mountain Ash.

“The work is being carried out using funding earmarked for Storm Dennis repairs, after Welsh Government allocated £4.4m to the Council on the event’s one-year anniversary during February 2021. The scheme in Ynyshir is unlikely to cause major disruption, with all pedestrian routes remaining open and only a rear lane closure for traffic. The Council will work with its contractor to ensure the work is completed as quickly and efficiently as possible.”