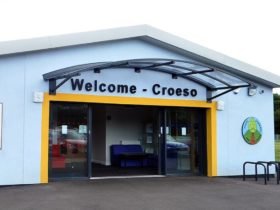 Plans for a new bridge to provide a direct link from Llanrumney to the A48 at the Pentwyn junction have taken a step forward following private-sector bids to deliver the scheme.

A report on the proposals – which form part of the East Cardiff Industrial Strategy – has been approved by Cardiff Council’s Cabinet yesterday, Thursday, November 19, where it will was agreed to sell land to help fund the development.

The proposal will see a new bridge and road link built over the River Rhymney linking Llanrumney to the Park & Ride site and the A48. This will improve access to public transport for local residents and open up job opportunities in the city.

As well as delivering a new pitch for Llanrumney Rugby Club the scheme will also provide a new full-spec, grass pitch for Llanrumney Football Club, mini pitches, and a brand new clubhouse and changing rooms for both teams to use. Local clubs will also get access at community rates to a new state-of-the-art sports complex being delivered through a tie-up between Cardiff University and the Cardiff City FC academy at the site of the existing Cardiff University playing fields.

The land being sold by the Council will also deliver a logistics centre on the site adjacent to the A48 bringing new jobs into the area. The full number of existing park & ride spaces will be retained. There will also be 170 new homes on land off Ball Road and Ball Lane, of which approximately 80 homes will be new Council houses.

Cabinet Member for Investment and Development, Cllr Russell Goodway said: “Currently all commuter traffic heading towards the city centre from the wards of Llanrumney, Rumney, Trowbridge and to an extent St Mellons have to use Newport Road which sees significant congestion during peak periods.

“This new infrastructure will finally improve public transport options for local residents. It will create a direct link to the Park & Ride facility where there will be a dedicated bus lane to take people directly into the city centre on public transport. This will get people to work quickly, significantly improving on car journey times while helping to cut congestion.

“The scheme will also help bring about investment in community facilities. The local clubs in the area will be given new and better facilities and will also have access to the new Llanrumney sports complex at community rates.

“The money raised through the disposal of these sites will be ring-fenced to build the new bridge and road link and will fund the new sporting facilities, bringing much-needed investment to the area.”

Heads of terms have been agreed with developers and the disposal of the land will now proceed, following the approval by Cabinet this week.