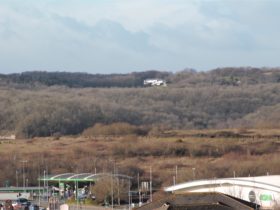 Grangemoor Park to remain closed until the end of the year

The plan forms part of a temporary two-year proposal for a now hoarded-off site at the St David’s Shopping Centre that used to accommodate a number of retail units. These included Cwtch Café, which has since relocated to Caer Street.

Developed by Swansea Council in partnership with Natural Resources Wales and Urban Foundry, the biodiverse pop-up park will feature a rain garden and a mixture of planting, living roofs, seating and bike shelters.

Local business start-ups will be sought to run two food and drink container units at the site to help further support the sector’s economic recovery from Covid-19.

A community container unit for the use of schools, community groups, third sector organisations and the council is also planned.

All pop-up park features and container units are being flexibly designed, enabling re-use elsewhere in the city centre in coming years.

Subject to approval at council cabinet on Thursday May 20, work on the pop-up park could start this summer ahead of completion in the autumn.

Also forming part of a temporary two-year proposal for the surrounding area is the demolition of the Llys Dewi Sant building and the St David’s multi-storey car park.

Demolition materials will be re-used as part of a new temporary surface on site by the end of 2021. New car parking is soon being introduced nearby as part of the council’s Copr Bay phase one district.

New lighting will also be introduced on site, along with information to show how the area will look in future.

The council is anticipating the appointment later this year of a developer for a major regeneration of the overall site in coming years as part of its Shaping Swansea initiative.

Cllr Rob Stewart, Swansea Council Leader, said: “This proposal will help breathe new life into the area although the pop-up park will only be a temporary installation until the final redevelopment of the area is completed.

“This is a key route for pedestrians between the city centre and our emerging Copr Bay phase one district including the Swansea Arena, a landmark bridge and plenty of new car parking spaces, so it’s important it stays open instead of being hoarded-off.

“Not only will this temporary plan ensure the continued safety, vibrancy and accessibility of the site, but it will also add more greenery, biodiversity and activity to the city centre, generating a further meeting place for people that adheres to latest Covid-19 guidelines.

“Pop-up events will also be considered for this temporary site to attract even more footfall and spending, with a focus on local start-up businesses for the food and drink units to further support our city’s economic recovery from the pandemic.”

“This project will also provide spaces for local businesses to make use of, and will bring the benefits of nature closer to people in the heart of the city.”

An expressions of interest call will soon go out for local start-up businesses interested in running the food and drink units on flexible terms, subject to the award of planning consent.

Buckingham Group Contracting Ltd – the council’s main contractor for the Copr Bay phase one district – would carry out the planned works.