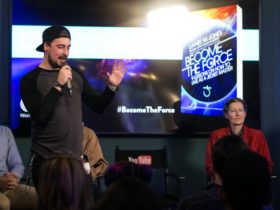 SUPERMARKET workers who came to the aid of a customer in cardiac arrest have been praised for their quick-thinking actions.

Staff at Tesco in Port Talbot gave CPR to a man who had collapsed in the car park and delivered two shocks using the store’s defibrillator before the arrival of an ambulance.

Colleagues also made a makeshift helipad to allow for the safe landing of the air ambulance.

Today, the Welsh Ambulance Service’s Chief Executive Jason Killens visited the store to extend a thank you for their efforts.

Jason said: “Every second counts in a cardiac arrest, and the way that colleagues worked together to begin the chain of survival gave this patient the best possible chance.

“They’re a shining example of what to do in this sort of scenario, and they should be really proud of their actions.”

A rapid response car, an emergency ambulance and an air ambulance were dispatched to the Prior Street supermarket after the 999 call in October.

Ashley, who is also an allocator in the Trust’s Clinical Contact Centre in Carmarthen, said: “When we arrived, good quality CPR was in progress by store staff and an off-duty South Wales Police officer.

“The store’s defibrillator had already given the patient two shocks, and staff had cleared an area for us to work on the patient and had also made a makeshift helipad.

“Their collective efforts on that day gave the man a fighting chance, and made the ambulance crews’ job so much easier.”

Today, Chief Executive Jason Killens was joined by the High Sheriff of West Glamorgan, Joanna Jenkins, to present staff at the store with a commendation.

“CPR and the use of the store defibrillator, as well as the creation of a makeshift helipad, demonstrate that everything possible was done to assist the customer.

“This commendation is richly deserved. Many congratulations.”

Store manager Mandy Walsh added: “I am incredibly proud of how our team responded to this emergency.

“We have trained first-aiders in all our stores in case someone does become ill, but the way our whole store worked together to help this customer is a credit to the professionalism of every colleague involved.”