Each year the Royal Welsh Agricultural Society presents promising students and rising stars with awards and scholarships which recognises and pays tribute to their enthusiasm and dedication to Welsh agriculture.

All of the following students have been presented with their awards at the Royal Welsh Show on Tuesday 24 July.

Student of the Year Award

The Royal Welsh Agricultural Society’s 2018 Student of the Year Award has this year been won by Dafydd Davies, Parc, Bala, Gwynedd.

Dafydd is currently studying at Grŵp Llandrillo Menai (Glynllifon) and will receive a certificate and a cash prize for a study tour.

The The Gwili Jones – Coleg Sir Gâr Educational Bursary has been awarded to Grace Elizabeth Marshall of Carmarthen.

This Award recognises the importance of supporting students who are entering the agricultural engineering industry through facilitating a one-week work placement with a prestigious manufacturer within the sector.

This year, the Grace will gain a valuable insight and overview of day-to-day operations at Krone UK (Leeds, Yorkshire).

As a world leader in product innovation in the hay and forage industry, Krone recognise the importance of continuously striving for excellence in all aspects of their business. The proposed placement will provide the Recipient with the opportunity to research potential future career choices in an ever-evolving industry.

For the tractor and machinery business of “Gwili Jones” (with dealerships in Carmarthen and Lampeter), the Award reflects its ongoing commitment to both serving and supporting the agricultural community, and they are grateful to Krone for offering this placement. It is testament to the ongoing collaborative working relationship between Gwili Jones and Krone, their shared core values and commitment to the agricultural industry.

Grace is a dairy farmer’s daughter from Carmarthen who has studied at Coleg Sir Gâr Gelli Aur Campus since she left school.

Initially she completed a Level 3 Diploma in Agriculture, however, during that time she developed an interest in machinery and engineering, and she returned to study for a BTEC L 3 Diploma in Land-based Technology. She has had a very successful year, completing all first year modules to a very good standard.

During her first year she has also completed an excellent work placement with Davies Brothers, Agricultutral Contractors at Dan Y Rheol, St Clears.

After completing her full Extended Diploma, Grace would like to further develop her studies at a higher level and aims to progress to a Degree Qualification in Agricultural Engineering.

The award for the best student of agriculture at the Institute of Biological, Environmental and Rural Sciences at Aberystwyth University, has been won by Samantha Alexander, Capel Iwan, Newcastle Emlyn, Carmarthenshire.

Sam has just been awarded a Class I BSc(Hons) in Agriculture and has already secured a post with CCF in Pembrokeshire as a graduate entrant after she returns from travelling early in the new year.

Candidates for the prize must have studied agriculture or a programme with a significant component of agriculture to degree, diploma or certificate level and should have been born and raised in Wales.

Siân recently completed her studies at Harper Adams University and will be graduating in September with a 2:1 in BSc (Hons) Agriculture with Animal Science. Sian has worked on the family farm in Tregaron for many years with a special interest in animal husbandry and record management for their beef, dairy and sheep production systems.

Siân has been a keen Pedigree Poll Dorset breeder for over ten years and was the youngest breeder to be voted onto the National Breed Society’s judging panel in 2013.
Siân is an active member of Llangeitho Young Farmers Club, where she has held positions of responsibility including as club secretary and chairman and has been successful at county, country and national level in a variety of competitions such as public speaking, stock judging, cookery and lamb trimming.

As part of her degree course at Harper Adams University, Siân’s industrial placement year was with Dawn Meats as Marks and Spencer’s select farm auditor, working with a team of four other placement students throughout the UK and independently conducting on farm beef and lamb audits in the midlands and Wales.

In addition to her studies Siân chaired the Harper Cymru student society in 2015‐2016, arranging meetings throughout the year and events such as attending the Meat Promotions Wales annual conference and the Welsh Winter Fair.

Siân is working with sheep genetics company Innovis based at Aberyswyth over the summer visiting their breeding partners within the UK doing back‐fat scanning lambs for breeding evaluations. At the beginning of September she will be moving to Norfolk to begin a permanent role as a shepherd.

Award judge, Hefin Richards said. ‘Sian was a very strong candidate with a long list of past achievements and clearly has the skills and determination to achieve many more. Her passion and commitment to the livestock industry is clear and the judging panel we would like to congratulate her and wish her well for her future career.’

The award, introduced in 1999, seeks to encourage students from Wales studying at Harper Adams University to contribute fully to developing both their academic and personal potential. It has been promoted jointly by RWAS and Harper Cymry.

The award recognises the student with the best academic record allied to a very positive contribution to the broader student learning environment of the college through its clubs, societies or through other extra mural activities.  Also embraced in the award is a full contribution to the activities of Harper Cymry (the college based club for students from Wales).

In addition, the adjudicators at the interview, seek out the student who has the best thought out career plans and potential.

A Royal Welsh Agricultural Society award for students in memory of the late Dr Richard Phillips, a leading figure in agricultural education in Wales, has been won by Zoe Morgan, Aberystwyth.

Zoe was a student at Aberystwyth University and has just been awarded a Class I BSc (Hons) in Agriculture with Animal Science. Zoe has already secured a post with ADAS as an agricultural consultant in the Midlands and will be starting her new role in late summer.

The annual award, made possible by the generosity of Dr Phillips’ family, is open to students graduating from agricultural departments of Aberystwyth and Bangor universities. This year there were five candidates for the £150 prize.

Students are pre-selected by the heads of the agricultural departments with each university being entitled to submit up to four students of agriculture or agriculturally related subjects.

A £3,000 Royal Welsh Agricultural Society scholarship to encourage students to develop their potential through academic achievement so that they can make a more effective contribution to the agricultural industry has been awarded to Dafydd Steffan Rees, Llanarth, Ceredigion.

The Scholarship, sponsored by Waitrose, is intended to help students from Wales who have taken their Higher National Diploma or foundation degree at an agricultural college in England, Scotland or Wales.

Steffan is the fourth generation of a family farm made up from two holdings measuring 400 acres in total, farmed jointly by his parents and uncle. The farming system comprises dairy, sheep and arable with milk from the 140 dairy herd sold to Glanbia and about 60 followers reared.  The sheep enterprise is mainly of the Lleyn breed that are crossed with Charollais rams for meat production.  About 78 acres of maize and spring barley are grown for feeding to the stock on the farm.

Steffan was educated at Ysgol Gyfun Aberaeron where he had very good results at GCSE level and this was followed by two years study at Coleg Sir Gâr where he had very commendable results at A level. Despite his desire to return immediately to work on the home farm he was persuaded by his parents to pursue his education and was accepted at Aberystwyth University to study for a Foundation Degree Course in Agriculture which he will complete this year. He is now very pleased that he did continue his education and has decided to further enhance his prospects by applying to top up in the next academic year with a BSc degree course in Agriculture at Aberystwyth.

Steffan is keen to improve all aspects of farm productivity through bench marking and adoption of new technology. A particular interest is improving grass utilisation through operating a rotational grazing system and use of plate meters to measure grass growth. He undertook work experience at a local farm that excelled in the use of these techniques and plans to base his degree dissertation on further research into these aspects. He has also applied to Farming Connect for various courses to enhance his knowledge.

Steffan’s interests are many and varied and as a member of the local Young Farmers Club has taken part in many competitions. He is a keen rugby player, currently with Aberystwyth RFC, having previously played at County level and captained the Scarlets West Under 16 team. He has also played cricket at under 18 level for Aberaeron Cricket Club.

On completion of his studies Steffan hopes to spend some time in New Zealand to further study their grazing systems and in Canada to gain further knowledge on genetic improvement. The judges have no doubts that he will make excellent use of the knowledge he will have gained at University and were very supportive of his aim to take every opportunity to expand his horizons even further before eventually returning to the home farm. 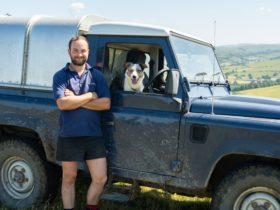