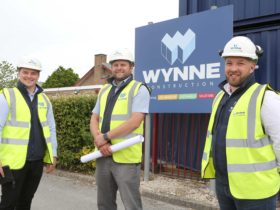 FROM a single phone line and fax machine to the digital advances of today, Sarah Ellwood has seen it all in her 20 years with Supertemps.

Sarah celebrates two decades with the Colwyn Bay and Bangor-based recruitment firm this week, having joined in the late 1990s when the company ran from a dining room table at mum Dorothy’s Llanddulas home.

Dorothy was managing to raise two children while maintaining contracts with some of the region’s biggest organisations, including North Wales Police.

After studying at the University of Northumbria and working in different sectors – including a marketing role with household products giant Procter and Gamble – Sarah decided to join her mum, and together they built the business into one of the leading recruiters in the region.

Dorothy eventually stepped away from Supertemps in 2007, leaving Sarah to take the helm as managing director, opening new branches and divisions, and employing up to 20 staff.

Supertemps went from one computer and phone line to a turnover of more than £2m, and is growing year-on-year.

“Everything was so different back then,” said Sarah.

“We had some big clients, especially along the coast, but communication was difficult – it was so archaic looking back.

“There was none of the social media or job boards or websites we have now, we would receive CVs in the post and often fax them through to clients, or drive over ourselves and give them in by hand.

“The 1990s does not feel like that long ago, but if you look at the technological advances we’ve made it’s incredible to see how much things have changed.”

Along with more modern and innovative equipment and online platforms, she says a raft of legislation is one of the biggest differences between then and now.

“There was no holiday pay for temps, no national minimum wage, no working time directive, no parity pay or agency workers’ regulations,” said the mum-of-one.

“That was also the time they introduced the Data Protection Act, which is about to be replaced by the General Data Protection Regulation (GDPR), so it’s come full circle.

“That’s going to impact on how we work to an extent, but we see it as a massive positive, an opportunity to ensure our ducks are all in a row and our data is fully cleansed and systems are all compliant.”

The last three years have arguably been the busiest, with investment in a new construction division, the rebranding of executive and IT branch S2 Recruitment, and an increase in staff to cope with demand.

While it’s been busy, it’s been buoyant, but the last 20 years have not been all plain sailing for Sarah and the team.

“Supertemps has been on an upward trajectory for some time, but of course like most businesses we’ve had our tough periods,” she said.

“I remember when I joined we were struggling with the loss of our market share as other independent agencies began to spring up and national firms moved into the area.

“We had taken our eye off the ball and that’s a mistake – you have to be aware of what’s going on around you in business and remain at the forefront of your industry.”

Sarah added: “Ultimately, I’ve been incredibly lucky and love working with such a great group of people in a wonderful part of the world.

“We deal with companies nationwide but our roots will always be here in North Wales.

“But while we’ve grown we will never lose our values or underestimate the importance of our clients and candidates to us – we are a people business after all.”

So will she be encouraging her nine year-old son Oscar to follow in her footsteps and join Team Supertemps?

“Oscar already tells me he’s coming to work here and plans to run the company one day,” said Sarah.

“I’ve told him there’s no guarantees – he can start from the bottom. But that’s only if he gets through the interview process!”