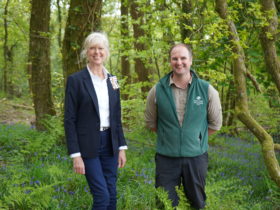 Scientists who highlighted the bug-busting properties of bacteria in Northern Irish soil have made another exciting discovery in the quest to discover new antibiotics.

The Traditional Medicine Group, an international collaboration of scientists from Swansea University, Brazil and Northern Ireland, have discovered more antibiotic-producing species and believe they may even have identified new varieties of antibiotics with potentially life-saving consequences.

Antibiotic resistant superbugs could kill up to 1.3 million people in Europe by 2050 – the World Health Organisation (WHO) describes the problem as “one of the biggest threats to global health, food security, and development today”.

The search for replacement antibiotics to combat multi-resistance has prompted researchers to explore new sources, including folk medicines focusing on environments where well-known antibiotic producers like Streptomyces can be found.

The Traditional Medicine Group discovered that soil used in ancient Irish folk medicine in the West Fermanagh scarplands contains several species of these antibiotic producing organisms. This area of caves, alkaline grassland and bog is scattered with many remnants of previous Neolithic habitation.

One of the research team, Dr Gerry Quinn, a previous resident of Boho, County Fermanagh, has been aware of the healing traditions of the area for many years.  Several years ago, an analysis of the soil there led to the team discovering a previously unknown strain of bacteria effective against four of the top six hospital superbugs that are resistant to antibiotics, including MRSA.

Since then, their research has continued but given local religious sensitivities and the self-limiting nature of the original site, the group relocated their search to another area of the West Fermanagh scarplands that retained the essential alkaline nature of the grasslands whilst also providing a link to traditional folk medicine.

Dr Paul Facey, one of the lead researchers from Swansea University said: “The fact that traditional medicine is incorporated in many local folk tales led us to believe that there was a good possibility of finding strong antibiotic producing organisms in other locations in these limestone hills.”

The group discovered that their latest finding was able to express an even wider range of antimicrobial activity than their previous discovery.

The results of this study have now been published in MDPI Applied Sciences and the DNA sequence has been deposited in the American national collection.

The group has yet to chemically identify the compounds responsible for antibiotic activity but preliminary analysis indicates there are genetic similarities to other known antibiotic production genes.

Even though the antibiotic genes found in Streptomyces sp. CJ13 are not identical to template antimicrobials, it raises the interesting possibility that these could  be new varieties of antibiotics.

Given the significant contributions made by Streptomyces to the fields of cancer and anti-viral therapies, team member Hamid Bakshi added: “We are confident in the great potential of our most recent discovery to provide many interesting discoveries.”