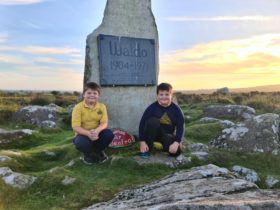 Cardiff’s New Theatre Autumn programme has opened and it’s safe to say they are not holding back. A glance at the cast takes you to Barry Island, Downton Abbey and Holby to name just a few. This is a great calibre of actors, assembled to bring to life before our very eyes, the stage adaptation of the hit 80’s film Rain Man.

As in the film, it all starts in the car dealership of Charles Sanford Babbitt, played by Edward Speleers (Downton Abbey, Wolf Hall). Things are not looking too good until he receives a phone call about his estranged father’s death. Could this help Charlie out of his current financial misery? Not being close to his father, he had no idea that he has been left out of a $3 million inheritance; oh.. and he also didn’t know he had a brother.

Once he arrives in Cincinnati, he finds out that he has inherited both prize winning roses and a 1949 Buick Roadmaster convertible. This was his father’s, and the same car that ended their relationship; having borrowed it and subsequently spent two days in prison for theft.

Is this enough for Charlie? Being an extremely selfish man he wants his cut and has to get close to his high-functioning autistic brother Raymond, played by Mathew Horne (Gavin & Stacey, The Catherine Tate Show). Raymond can read two books at the same time; one with each eye, at a rate of ten pages a minute. We also find out that’s it’s impossible for Raymond to forget.

With a mass of dialogue, it’s no easy feat but Mathew Horne is tremendous in this role. His on stage brother Edward Speleers is also excellent and the changing dynamic between both characters was a pleasure to witness. They compliment each other perfectly in this funny, emotional and uplifting story. The supporting cast helped to bring this story to life in ways that caused the audience to gasp and also give a standing ovation.

Having been confined to an institution for most of his life, Raymond was yet to find out he would be leaving and very dramatically. He needs his books, his routines. But these are left behind suddenly when Charlie takes him on the road trip of their lives.

This is a great story of two brothers, separated for years and reunited. The journey that they embark on fosters anticipation from the audience; with laugh out loud moments you know are coming but are nonetheless hilarious. Whether it’s when Raymond mimics the sound of an intimate couple in bed or when he mistakes the outburst of a waitress for someone in a phone book. The journey also takes the brothers to Las Vegas where Charlie looks to utilise Raymond’s skills to count cards.

You start off not liking Charlie, who looks to be taking advantage of his brother. Removing Raymond from his habitat causes him great pain and you start to wonder if it’s really worth it. But as the story evolves so does their relationship and Charlie begins to look out for his brother and it might well be worth all the stress after all.

With professionals giving their opinion on what is best for Raymond, maybe, just maybe, the trip of his life has given him what his needs most. Will Raymond save Charlie? Or will Charlie save Raymond? You will have to come and find out.

Rain Man runs at the New Theatre, Cardiff until Saturday 15th September. Tickets are available from the Box Office on (029) 2087 8889 and here.