A renowned artist from Rhondda is working with teenagers from a South Wales college to support their artistic dreams and help them develop a series of public artworks celebrating Wales and its culture.

Treorchy artist and TV presenter, Siôn Tomos Owen, who previously fronted S4C’s Pobol y Rhondda, is hosting a number of bilingual workshops with art learners from Coleg y Cymoedd and working with the aspiring artists to create their own masterpieces.

Learners on the programme, who are all studying a Foundation Diploma in Art and Design, have developed their own murals which are being showcased on college buildings at Coleg y Cymoedd’s Nantgarw campus.

During the workshops, learners heard from Siôn about how to convert their ideas on what Wales and the Welsh language meant to them into art, and how to do so creatively, without falling into stereotypes.

The project was sponsored by the Coleg Cymraeg Cenedlaethol as part of a wider scheme to promote the Welsh language across FE colleges. 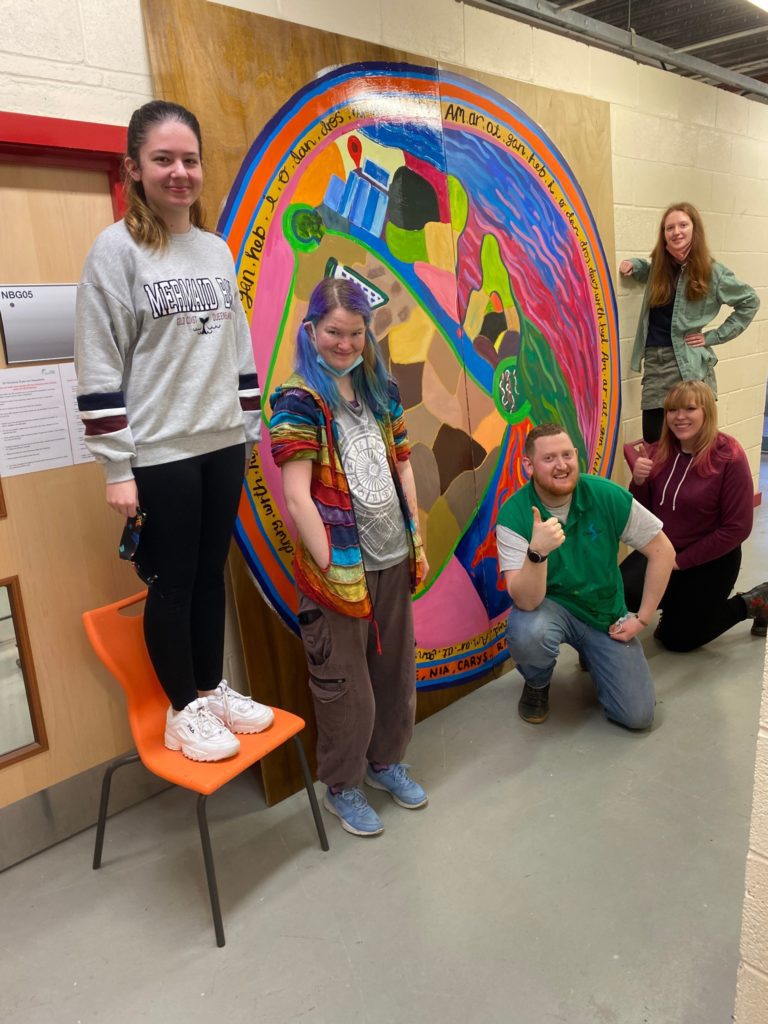 Speaking about the project, Siôn said: “The experience of working on developing murals with these learners has been interesting and challenging, which is my favourite kind of project! The ideas the learners have developed from the workshops have been impressive as they have creatively thought about what and who modern day Wales is and how to convey this artistically, considering how to incorporate both the English and Welsh language.”

The two murals, which include a self-portrait of every person who has worked on the project, will be displayed in a prominent position at the Nantgarw Campus.

Jessica Moss, lecturer on the Art and Design Foundation Diploma at Coleg y Cymoedd, said: “I am so proud of the learners and the dedication they have shown to this unique collaborative project with Siôn. They have all worked very hard, learning new skills and techniques, and their works will be a great addition to the campus as well as their own personal portfolios.”

Coleg y Cymoedd’s Welsh Language Manager, Lois Roberts, who co-ordinated the project, added: “When I initially came up with the idea of having learners create murals to promote the Welsh language and culture, I was expecting to see a lot of daffodils, harps and other famously Welsh symbols, but under Siôn’s direction, the learners have created illustrations that have really got to the heart of what being Welsh means to them, as young people living in the valleys.

“I’d like to thank Coleg Cymraeg Cenedlaethol for funding this important project and Siôn Tomos Owen for providing our learners with this invaluable experience”.

Following the success of this initial project, Sion is now set to visit Coleg y Cymoedd’s Rhondda campus to deliver workshops to its Foundation learners and create another mural for the Rhondda Campus’s Colliery 19 restaurant. 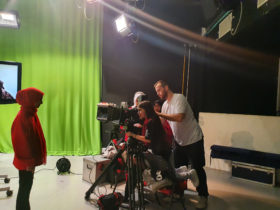