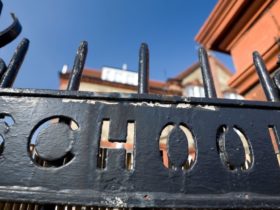 A team of rocket enthusiasts from USW travelled to Scotland last month to take part in the Mach-22 Launch Competition and Conference.
The six undergraduates competed against teams from across the UK in the event, which was designed to give university students an opportunity to develop practical, hands-on aerodynamics, mechanical, electronics and communication skills, with industrial technical support provided remotely to the teams.

It included skills workshops supported by national space companies, with the rocket-based event pitting undergraduate students against each other to design, build, and launch a rocket.

Senior lecturer Dr Leshan Uggalla, who leads USW’s Rocketry Society, and visiting professor Dr Phil Charlesworth, who is the technical lead for the Society, supported the team during the event.

“The launch was initially going to be on the Saturday, but was moved to the day before because bad weather was predicted,” Dr Uggalla said.

“The students had already flown to Scotland to take part in the workshop and training activities, and we were taking the rocket motors by car because it could not go on an aeroplane. The change in date meant we had to drive for 12 hours overnight to get it there.

“Unfortunately, the parachute didn’t eject at apogee so the rocket landed very heavily and was destroyed.  The team were disappointed, but not discouraged.

“Within 24 hours they had identified how to improve and had a clear plan for a successful campaign in 2023.  They showed they have the skills and determination to design and build rockets which can compete effectively against teams from some renowned institutions.

“We are really proud of and amazed by our team for what they have achieved within the last few months, their commitment, and making it to the Mach Rocketry competition for the first time, despite their assignments, exams, dissertation submissions, part-time work, and family commitments.”

Dr Charlesworth added: “We should all be proud of these students.  In the space of a few months they’ve designed, built and flight-tested a complex rocket and payload.  In more than two decades of building and launching rockets I’ve seldom seen such determination.”

Gayan Ramanayaka said: “It was a great opportunity that we were able to participate in the MACH -22 Complex rocket and CanSat competition, held at Spaceport Machrihanish. The competition allowed us to meet like-minded people, building networks with rocketeers, and see a bigger picture of the importance of spaceport that have in the UK.

“Considering the project’s tight timeframe, parallel to our academic studies, competing in the project was a big challenge for most of us. Looking back, we have seen incredible growth and progress in developing our skills through working on this complex project within these few months and we could not be prouder of our team.

“We are genuinely excited to see what the next challenge will bring us. We sincerely appreciate opportunities the University of South Wales has offered.”

Natacha Laethongkham added: “Being part of the rocketry society at USW and participating in the MACH-22 competition was a valuable experience. Working on this challenging project, considering the tight timeline and additional complexities, it was truly amazing to see how our team strived to make the project successful.

“The opportunity has also pushed us beyond our comfort zones, breeding our resilient mindsets and persistence. We have grown tremendously in months. We are so grateful for the support that the University of South Wales offered and look forward to seeing what we could accomplish in the near future.”