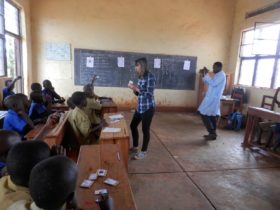 The RSPCA today launches its new strategy – which will have a huge and exciting impact on animal welfare in Wales; as the charity pledges to reduce‌ ‌neglect,‌ ‌abuse‌ ‌and‌ ‌cruelty‌ to pets by 50% and ensure a significant increase in the number of ‌farm‌ ‌animals‌ reared ‌to‌ ‌top ‌standards‌.

Rescuing and caring for animals will continue to be central to the RSPCA’s work in Wales – with the animal welfare charity continuing to call for statutory powers for its frontline rescuers to enable them to reach animals most in need more quickly, as part of its new ‘Together for Animal Welfare’ strategy.

Partnership working with other organisations across Wales and beyond is also a focal part of the ambitious new strategy, with the RSPCA stating it will not be able to meet a series of targets for animals alone.

RSPCA chief executive Chris Sherwood said: “Our frontline rescue and care work saving animals 365 days a year will continue to be at the heart of what we do.

“Despite being a global health pandemic with the country locked down for months there were still more than a million calls to our rescue line last year and our frontline officers looked into almost 100,000 complaints of animal cruelty.

“The need for the RSPCA is as great as ever and we are determined no animal is left behind.

“But the world is changing and we recognise we can’t do it alone. To achieve our ambitious aims for animal welfare, we will partner with volunteers, communities, RSPCA branches, colleagues in the welfare sector and beyond, to reach the animals who need us most.”

The animal welfare charity has outlined eight bold ambitions under the new strategy, which it aims to achieve by 2030. This RSPCA’s ambitions read as follows:

The RSPCA has also announced that it is exploring stepping back from its role as a prosecutor of animal welfare offenders – and instead passing prosecutions to the Crown Prosecution Service, to instead offer greater focus on its frontline work rescuing animals and investigating cruelty.

Chris added: “Like all charities, we’ve faced unprecedented challenges in the past year due to coronavirus and our strategy reflects that. But at a time of enormous change and uncertainty about the future there are some things we can depend on. The RSPCA is one of them. We will rescue and protect animals for as long as they need us.

“We are particularly thrilled that this year could see one of our hard-fought campaigns to raise the maximum penalty for animal abuse from six months to five years become reality in Wales, but this also means a big change in the way cases are prosecuted and sentenced. Some of these cases will now move to crown courts and those carrying out the worst abuse could face lengthy jail terms. This places a huge responsibility on a charity’s shoulders. We believe this responsibility should sit with the Crown Prosecution Service, which is a statutory public body with regulatory oversight.

“Alongside this, we are seeing trends with cases with hardened criminal gangs involved in puppy farming, dog fighting, cock fighting or hare coursing, sometimes with millions of pounds changing hands. We are an animal charity and our concern is welfare but these complex cases can involve serious offences such as fraud or weapons. We have already seen puppy farming reports to us increase five-fold in a decade and with the increasing demand for puppies during lockdown we believe more of these complex cases will come our way.

“Let me be clear that we are not stepping back from prosecutions, only from our role as the prosecutor. Our inspectors will still be rescuing, investigating and collecting evidence of cruelty and abuse. We believe that there may be a better way to ensure animals get the justice they deserve by bringing together our expertise in investigations with the CPS’ skills and resources. We would like to reassure the public that we will not step back from the role of prosecutor until we are assured that the CPS has the commitment, the resources, and the expertise to make sure that animals continue to get the justice they deserve.”

The launch of the strategy comes at a pertinent time for animal welfare – with the 2021 Welsh Parliamentary election only months away. RSPCA supporters have – in recent months – been writing to Wales’ major political parties urging them to adopt policies contained within the RSPCA’s ‘Issues for the Welsh Parliament 2021-26’ manifesto proposals.

In late 2019, the RSPCA produced a report at the request of the Welsh Government, outlining the role statutory powers could play for its frontline rescuers – and achieving such powers is a focal point of the new Strategy. It is hoped the next Welsh Government will continue this work to enable the RSPCA to be better equipped and accountable, and ease the historic bureaucratic burden currently placed on other public bodies, by supporting giving RSPCA officers powers under the Animal Welfare Act.

The RSPCA feel proposals released this week from the Welsh Government on a ban on the third party sale of puppies and kittens in Wales is a useful first step in dealing with poor welfare practices too often associated with the puppy and kitten trade in Wales; and continues to urge the Welsh Government to revisit many of the recommendations made by the Wales Animal Health and Welfare Framework Group in a recent review of Wales’ dog breeding legislation.

A White Paper on a future Agriculture (Wales) Bill has also been published – a legislative agenda which the RSPCA hopes will ultimately lead to farmers in Wales being incentivised for delivering higher welfare standards on their farms; something that could enhance the lives of millions of agricultural animals in Wales.

Heidi Allen, the RSPCA’s director for advocacy, added: “I am driven by giving a voice to the voiceless – whether that is speaking up for people or animals. Throughout its long history the RSPCA has campaigned to make change in order to better the lives of animals. The next decade promises to be just as successful – and the launch of our new Strategy comes at a crucial time in Wales, with a host of issues at a crossroads, and the next Welsh Parliamentary elections a matter of months away.

“From securing statutory powers for our frontline officers, to campaigning to ensure higher farm welfare is even more integral to Wales’ rich agricultural history, and ensuring widespread action to tackle poor puppy breeding practices, our work with the Welsh Government and other stakeholders is set to be so important as we enter this pivotal moment for animal welfare in Wales.

“With our supporters urging Wales’ political parties to present a vision for an even kinder Wales at the forthcoming election, and with big issues like the third party sale of puppies and kittens to be tackled even before then, it’s such a busy time for animal welfare.

“Yet, in the long-term, we want to secure a radical change in how as a wider society, we view animals. They are not ours to exploit, to the contrary – just like us, they can experience suffering and joy and have their own needs and wants.

“Only by shifting fundamental attitudes and driving legislative change will we transform the lives of animals. This is why advocacy and prevention is so important. Improving people’s knowledge and understanding of animals is a key pillar of our strategy alongside our direct rescue and care work.

“We want to see the vital interests of animals at the heart of public policy making: local, national and international; social and economic. This requires structural change to ensure the welfare and interests of animals are safeguarded and enhanced when policy is developed and implemented, whether it is through the planning system or international free trade agreements, with harmful and regressive practices not tolerated.

“Public policy and attitudes are also vital to shape markets and their practices, such as within the agricultural and pharmaceutical industries, both of which have a significant impact on animal welfare.”

Heidi added: “RSPCA Cymru will continue to lead the debate on animal welfare in Wales, sharing our evidence, insights, knowledge and practical experience. We will bring organisations and individuals together to advocate for change. But we know animal welfare transcends national boundaries, and the RSPCA will continue to be active across the UK, in Europe and globally too.”The RSPCA’s core work of advocacy and prevention through information, advice and education are also a strong focus of the strategy with the charity aiming to reach half of million young people in England and Wales with animal welfare messages by 2030. Wales is switching to a new curriculum from 2022 – and the RSPCA plans to issue new resources to support schools and learners understand more about animal welfare, as part of the Wales’ new Areas of Learning and Experience (AoLEs).

David Allen, the RSPCA’s head of education, added:  “Prevention is what the ‘P’ stands for in the RSPCA’s name and it is crucial for us to educate the younger generation now to prevent animal cruelty in the future.

“We want to galvanise young people around animal welfare so that we nurture a generation which is instinctively kind and compassionate to animals.

“To do this we will need to work hard to inspire kindness and compassion to animals and support people so that they have the necessary information, knowledge, understanding and skills to take action and get it right for animals.

“Wales’ new curriculum will play a key role in helping us to achieve this – and we look forward to sharing our materials with teachers, schools and learners across Wales to ensure animal welfare, compassion and empathy are at the heart of the new ways schoolchildren across the country will be learning under this new curriculum.”