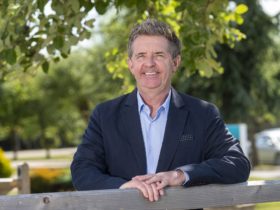 A woman from Pontypridd has received a medal from Diabetes UK Cymru for living with diabetes for 50 years.

Sandra Spray Hazlehurst, 72, was diagnosed with Type 1 diabetes when she was 18 years old but has never allowed the condition to hold her back. She worked for HTV for 25 years and has for the last 10 years been a Governor on the Board of the University of South Wales.

Type 1 diabetes is a lifelong condition that affects around 19,000 adults in Wales. People with the condition don’t produce the hormone insulin, which controls the amount of glucose in the blood. Nobody knows what causes Type 1 diabetes and it isn’t currently preventable.

“My sister was diagnosed with Type 1 diabetes when she was seven, so I knew a lot about it when I was diagnosed 11 years later. I hated it to begin with. It was awful; I had to eat meals at the same time every day and the needles were very thick and quite intimidating to use.

“Much more is known about Type 1 nowadays. When I went on a diabetes education course, 40 years after being diagnosed, I learnt so much about managing my diet.

“Another breakthrough came when syringes became transportable and I could carry my insulin easily in my handbag. I always have it with me and test my blood sugars regularly to check they are stable.

“My rule is that diabetes lives with me, not the other way around. I always let people know about it and do my insulin injections in public. It’s very important to be open about it to raise awareness and help people understand the condition more.”

Sandra received the Alan Nabarro medal from Diabetes UK Cymru in recognition of her perseverance and courage in managing the condition. Alan Nabarro waged a lifelong battle against discrimination against people with diabetes. In 1968 he was awarded the OBE for his work with young people in London.

“Sandra is an inspiration and has really shown how taking control of your diabetes can lead to a long and healthy life.

“Diabetes is a serious and complex condition. If poorly managed it can lead to devastating but avoidable complications such as blindness, amputation and stroke. With the right care throughout their lives people like Sandra can manage the condition well and reduce the risk of developing complications.”