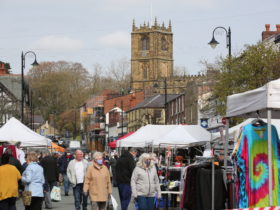 Home is where the heart is for health board staff who have again responded magnificently to an annual appeal to bring some festive cheer to Swansea’s homeless community.

The fifth annual ABMU Winter Homeless Appeal has been another resounding success, with organisers inundated with donations.

For the past five years it has been run by mental health nurse Pat Dwan and homeless nurse Janet Keauffling.

In association with homeless charity The Wallich, the appeal helps rough sleepers in the Swansea area.

Donations also support people who are vulnerably housed. These are former rough sleepers or homeless people who now have a roof over their head, but have little or no spare cash for clothes or toiletries.

The 2018 appeal was a very special one for Pat because it was his last one – he has recently retired.

Pat said around two dozen people slept rough on the streets of Swansea each night, with another 50 or so classed as vulnerably housed.

“This appeal means a lot to them, because it shows someone cares,”he added.

“Homelessness is a problem 52 weeks a year, and the donations we collect are distributed throughout the year.”

The response was, as always, magnificent, with staff dropping off hundreds of bags filled with donations at Singleton, Morriston and Cefn Coed hospitals, along with ABMU Headquarters in Baglan.

These were collected by volunteers with The Wallich ready for distribution in the months ahead.

Pat said: “A great big thank you to the ABMU staff yet again. As always they stepped up to the mark for the annual Winter Homeless Collection, and they can rest assured that it will be put to good use.”

Janet said the donations made each December usually lasted until around September of the following year.

She added: “This is such an important event for us.

“It allows us to offer people a change of warm, dry clothes when it’s been raining all day and everything they possess is soaked through – or to provide another layer when they’re sleeping out in freezing temperatures.”