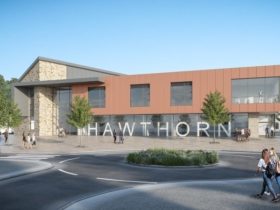 A statue to honour the pioneering writer, evolutionary theorist and trailblazing feminist Elaine Morgan is being unveiled in Mountain Ash following a campaign by the Monumental Welsh Women group.

This will be the second statue of a named, non-fictionalised woman to be erected in an outdoor public space in Wales, following Monumental Welsh Women’s successful unveiling of the Betty Campbell Monument in Cardiff in September 2021.

The statue of Elaine Morgan, a permanent immortalisation in bronze of the celebrated daughter of the South Wales Valleys, will be unveiled in a special ceremony outside Meddygfa Glan Cynon Surgery in Mountain Ash, Rhondda Cynon Taf, on Friday, March 18.

It has been designed and created by renowned sculptor Emma Rodgers, who is known for capturing both action and tenderness within her sculptural works. Rodgers’ works convey the power and life force of their subjects.

The sculpture was commissioned following the Hidden Heroines campaign organised by Monumental Welsh Women, broadcast on BBC Wales. The other women on the shortlist were Margaret Haig Thomas (Lady Rhondda), Elizabeth Andrews, Sarah Jane Rees (Cranogwen) and Betty Campbell, who became the first woman on the list to be honoured with a statue.

Elaine Morgan was a woman of many talents who changed the world from her desk in Mountain Ash, never abandoning her valleys roots. Elaine Morgan excelled in both the arts and science and became a top TV writer, a feminist icon, and a ground-breaking evolutionary theorist.

In a career spanning 30 years, she won a host of awards and scripted some of the best-loved dramas in television history, including How Green Was My Valley and The Life and Times of Lloyd George.

Born into a poor mining family in Hopkinstown, she won a scholarship to Oxford University. Upon arrival and hearing her valleys accent, it was assumed she was applying for a job as a cleaner. But Elaine became a star student, chairing political societies and honing her literary skills.

After graduation she taught for three years with the Workers’ Educational Association. Married with three sons by the 1950s, she began writing plays to help make ends meet. One of the first women to make an impact in the male-dominated world of the small screen at this time, her first television scripts were accepted before she even owned a TV set.

In the 1970’s, Elaine Morgan turned her attention to science, taking on another male-dominated sphere with a new theory of human evolution. In her book The Descent of Woman (1972), she argued human evolution should widen its focus beyond the male hunter – females were an equally vital part of the story. The Descent of Womanwas an instant global best-seller. Celebrated in America as a feminist heroine, the book became a key text in the Women’s Liberation movement.

Elaine Morgan published several more books on evolution – including The Aquatic Ape (1982), which again captured global attention; The Scars of Evolution (1990); The Descent of the Child (1994); The Aquatic Ape Hypothesis (1997) and The Naked Darwinist (2008).

Remaining a vital voice well into her old age, more than a million people viewed her Ted Talk on evolutionary theory given when she was 89 years old. Elaine Morgan continued to write her award-winning Western Mail column The Pensioner into her 90s.

She was appointed OBE in 2009 and the same year was elected a Fellow of the Royal Society of Literature.

Helen Molyneux, founder of Monumental Welsh Women group said: “Our Mission is to celebrate female ambition and success by commemorating the achievements of great Welsh Women – and to inspire the next generation of great Welsh women.

“We are delighted to be able to announce the commissioning of our project’s second statue, of Elaine Morgan – during Women’s History Month and in the 50th year anniversary of the publication of Decent of Woman (1972) and 40th year of The Aquatic Ape (1982).

“Elaine was a wonderful dramatist and feminist icon, and we are thrilled to be able to immortalise her achievements so that she will be remembered in her hometown and beyond for years to come. She was an inspirational woman, and we hope her statue will act as an inspiration to the girls – and boys – of Mountain Ash and everyone who sees her.”

Gareth Morgan, Elaine Morgan’s son, said: “I know Elaine would have been delighted with the work of the Monumental Welsh Women statue campaign, not for the recognition of her own achievements but in celebrating the lives of the many extraordinary women that Wales has produced.

“Elaine’s work has helped to inspire women everywhere and I have seen messages to her from women all over the world who wrote to thank her for changing their lives.

“Some had been inspired to forge a career in science, while others took up writing or some other long held ambition after reading her books, and they all expressed how she had changed their view of women, of science and of themselves.

“Though Emma Rodgers’ talent as a sculptor speaks for itself, I know that Elaine would have been quietly delighted that the commission for her statue was given to a woman. Elaine has been called a campaigner for women’s equality, but secretly I think she believed in women’s superiority!

“In 2013 I escorted her to the ceremony where she was made an honorary freeman of Rhondda Cynon Taf and I know that the affection in which she is held in her homeland meant more to her than all the international awards that she won in her lifetime, so many thanks to all the people and organisations that have worked so hard to make this campaign a success.”

Emma Rodgers, sculptor of the Elaine Morgan Statue whose notable works include Liverpool’s statue of Cilla Black, was selected from a shortlist of internationally renowned female sculptors.

Emma Rodgers said: “I feel very privileged to be creating one of the first named female sculptures in Wales and incredibly pleased that it is of such an inspirational woman. Elaine Morgan not only had an incredible mind but also a real warmth and nurturing spirit.”

Councillor Andrew Morgan, Leader of Rhondda Cynon Taf County Borough Council, said: “Elaine Morgan was an inspiration to generations of people and her writings will live on forever for future generations to enjoy and ponder. Not only a very powerful writer, but she also adapted many great works for the television screen. I am delighted that this monument is being unveiled in Mountain Ash, a town she loved so much and lived in for many years.

“A very quiet and unassuming lady, Dr Elaine Morgan OBE was granted the Freedom of Rhondda Cynon Taf by the Council in 2013. She was so proud to be bestowed that honour and once again her memory is being honoured with this lasting memorial and wonderful creation.”

Emrys Elias, Chair of Cwm Taf Morgannwg University Health Board said: “We are very pleased that a Cwm Taf Morgannwg Health Board site has been chosen as the permanent home of the statue of Elaine Morgan. Through development of the Tŷ Calon Lân building with the support of Meddygfa Glan Cynon Surgery, we are investing in the current and future health and wellbeing of the local community, and now are honoured to celebrate its heritage here too.

We hope that as our patients visit the NHS team based here, they will be inspired by Elaine’s impressive legacy.”

The statue of Elaine Morgan has been made possible thanks to the support of Monumental Welsh Women’s funders and partners and generous donations by members of the public.