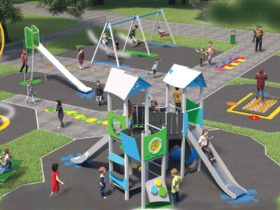 The Swansea Bay City Deal’s Joint Committee formally met for the first time on Friday August 31 at the University of Wales Trinity Saint David in Carmarthen to agree a range of measures aimed at further progressing the City Deal.

Taking over from a Shadow Joint Committee that had been in place until this stage, Joint Committee was legally created at the meeting. This means the newly-established Joint Committee can now make formal decisions to continue to drive forward the significant City Deal momentum that’s been growing over the last 18 months.

The meeting followed the UK Government, the Welsh Government and all four regional councils approving a legal document called the Joint Committee Agreement that outlines the future structure of City Deal working.

A tour of ‘Yr Egin’ in Carmarthen took place before the meeting. A creative and digital cluster, ‘Yr Egin’ is the first City Deal project to reach completion. Welsh language broadcaster S4C is already on board as the development’s anchor tenant, with the building having now achieved 74% occupancy ahead of its opening this autumn.

“The first meeting of the Joint Committee was another big step forward for the Swansea Bay City Deal, which will create close to 10,000 new, high-quality jobs in sectors like life sciences, the creative industries, smart manufacturing and energy in coming years.

“As well as major progress at ‘Yr Egin’, significant preparatory works have also started on Swansea’s digital indoor arena, Llanelli’s Wellness and Life Science Village and many other City Deal projects, which shows how confident we are of business case approvals, with several having already been informally shared with both governments for comment.

“Overseeing all aspects of the City Deal, the formal establishment of the Joint Committee will allow for speedy decisions to be made, which will help ensure people across the Swansea Bay City Region benefit from this unprecedented programme of investment as soon as possible.”

Other progress at the meeting included the formal appointment of Ed Tomp, Vice-President and General Manager of Valero UK, as chairman of the City Deal’s Economic Strategy Board, which will provide Joint Committee with expert private sector guidance.

A number of other Economic Strategy Board members from the private sector were also approved, providing expertise in areas including digital, health innovation, skills and manufacturing.

Details of all Economic Strategy Board members will be announced in coming weeks.