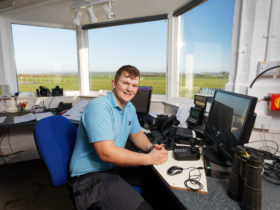 A former draughtsman who can’t use his hands because of multiple sclerosis is achieving acclaim for his artwork after learning to paint with a brush in his mouth.

From producing landscape paintings to intricate impressions of owls and bicycles, Steve lets his creative juices flow when presented with a blank canvas and a set of watercolours.

His achievements are particularly impressive as he is a latecomer to painting, having rarely dabbled with a paintbrush before arriving at Pendine Park.

The paintings he produces are created with the paintbrush in his mouth, a technique he decided to pursue following discussions with Sarah.

“It’s only since I came to Pendine that I’ve been doing painting,” said Steve. “My trade was a draughtsman so I have had experience of designing things, but I did not do painting.

“I can’t use my hands, so it seemed a good idea to try and use my mouth instead.

“It isn’t ideal, but it seems to be working and I’m getting enjoyment out of it.

“I’m not able to use my hands but I can use my mouth. I don’t have any problems using it and I feel fine when the paintbrush is in there.

“You have to be precise, but I’m managing to keep the paintbrush steady in my mouth.”

Having now caught the art bug, Steve hopes others will consider trying out painting with their mouth if they are unable to use their hands – or even if they can.

“If anyone is in the same position as me, I would encourage them to consider painting in the same way I do,” said Steve.

“It’s nice that I can do the same thing as other people, even though I haven’t got the use of my hands.

“I think people seem to be interested in what it’s like to paint with your mouth, even if they can use their hands.

“Maybe they should give it a try and see what sort of paintings they can produce.”

Steve was in his mid-30s when he was diagnosed with MS in 1990, later becoming wheelchair-bound.

He has helped raise awareness of MS in the region, having previously campaigned for disabled people to be afforded improved accessibility to public transport.

Steve also shares his experiences about living with the condition with Wrexham Glyndwr University students through the Outside In programme.

Originally from Lancaster, Steve lived in Bangor-on-Dee for 30 years before moving to Pendine Park early last year due to increasing care requirements,

Being part of the art class has been one of the highlights of his time at the home.

“I enjoy coming along to the art class,” said Steve.

“It is good to be able to sit and think about what things I can paint. It is important to me that they look right.

“I get on well with Sarah and it is nice to work with her. She has lots of good ideas.”

Steve is married to Shona and has a daughter, Victoria.

The majority of his time at Pen y Bryn has coincided with the home following strict lockdown restrictions, to help prevent the spread of Covid-19.

“It has been difficult to see everybody during lockdown. I saw my wife recently for the first time in about three months,” said Steve.

“But at least I have been able to speak to my family over Zoom on a regular basis.

“Hopefully, things will start to get back to normal soon.”

Sarah has been impressed by how Steve has brushed up on his artistic skills and has been keen to paint with his mouth.

She said: “At Pendine Park we are keen to emphasise that residents can acquire new skills when they come to our homes and the arts it all its forms are central to daily life. Steve is a prime example of this.

“He does not have a history of painting, but he has taken to it very quickly in the time he has been in our art class.

“He has embraced painting with his mouth. He was happy to try it and it is working well for him.

“As he does not have the use of his hands, this technique is enabling him to paint and the work he is producing is very impressive.

“Steve is a valued member of our art class. We look forward to him producing many more paintings in the future.”

Penybryn manager Tracey Cuthill said: “The skill and dexterity Steve achieves with the brush in his mouth is remarkable and it’s wonderful to see the pleasure and fulfilment he gains from his new-found love of painting.

“The arts are the golden thread running through everything we do at Pendine and Steve is a perfect example of how artistic endeavour can enrich the lives of residents and staff alike.”