The headline NatWest Wales Business Activity Index – a seasonally adjusted index that measures the month-on-month change in the combined output of the region’s manufacturing and service sectors – registered 55.0 in January, up from 53.4 in December, to signal a strong upturn in business activity. Although the rate of growth was quicker than the UK average, the rise in output was the second-slowest in the current 11-month sequence of expansion. Companies noted that greater activity was linked to an uptick in client demand.

Welsh private sector businesses signalled a solid rise in new orders at the start of the year, albeit relatively muted in the context of growth throughout 2021. Where an increase in new business was reported, firms linked this to a pick up in client demand following the easing of COVID-19 restrictions, especially on the service sector. The rate of growth quickened, but was the second-slowest in the current 11-month sequence of expansion and softer than the UK average.

January data indicated weaker output expectations at Welsh private sector firms, as the degree of optimism fell to the lowest since October 2020. Nonetheless, the level of confidence was solid overall. Positive sentiment was attributed to new product development and hopes of a further uptick in client demand following looser COVID-19 restrictions. Expectations were among the weakest of the 12 monitored UK areas, stronger than only Northern Ireland and the North East.

Welsh private sector firms signalled a sharp expansion in employment during January. The rate of job creation was the fastest since last September and broadly in line with the UK average. Companies noted that higher workforce numbers were linked to increased demand and greater business requirements. A rise in staffing numbers was broad based, with service providers registering the faster increase.

Welsh private sector firms registered a substantial increase in the level of outstanding business at the start of the year. The rate of growth in backlogs of work accelerated for the second month running to the fastest since last October. The rise in work-in-hand was the sharpest of the 12 monitored UK areas. Higher backlogs were reportedly due to shortages of raw materials, longer lead times for inputs and staff illness.

Welsh companies recorded a further substantial increase in output charges at the start of 2022. The rate of selling price inflation softened slightly to the slowest for four months. That said, output charges rose at the second-steepest pace of the 12 monitored UK areas, slower than only Northern Ireland. Many firms stated that greater selling prices stemmed from the pass-through of higher costs to clients where possible. 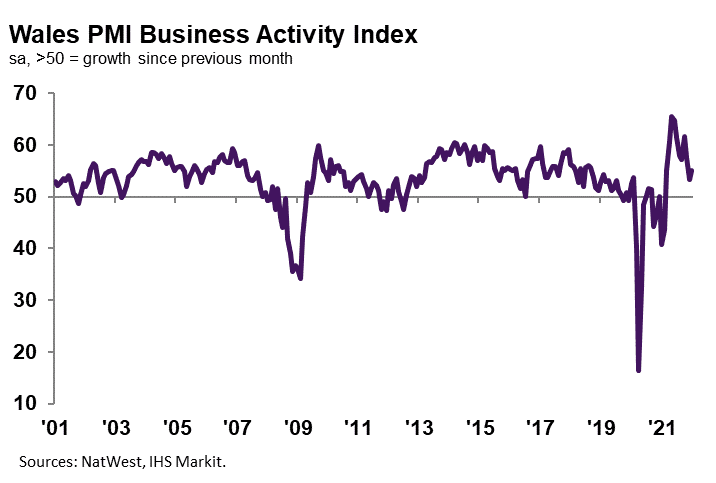 “Welsh private sector firms signalled a slight renewal in growth momentum during January, as expansions in output and new orders picked up from December’s recent low. That said, paces of increase were among the slowest in the latest sequence of growth, as business confidence took a tumble to the weakest since October 2020.

“Lower business optimism was not reflected in hiring decisions, however, as job creation ticked higher amid a marked rise in backlogs of work. Encouragingly, service providers registered the sharper uptick in employment as COVID-19 restrictions were eased.

“Nonetheless, relatively muted demand conditions meant firms softened increases in selling prices at the start of the year. Cost burdens rose at one of the fastest paces on record, but firms struggled to pass through input price hikes to clients.”