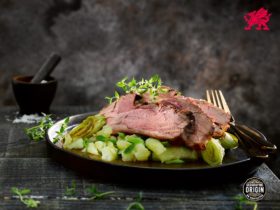 During a farm visit, the family showed Mr Asghar around the typical Monmouthshire grass farm on which the main enterprise is the fattening of store cattle and lambs.

Guy and Cath hope that their children might take over the farm business one day, but Guy said: “We are very concerned about the future of our own farm and also the future of the industry in general. With everything that’s going on such as, substantial changes to farm policy, uncertainty over direct support and export markets, new burdensome and draconian environmental regulations, it doesn’t bode well.

“It certainly doesn’t make the industry look very attractive as a career option for our children and if the next generation don’t take farming and food production up – who will?”

With regard to the environment Guy emphasised that farmers already work hand in hand with nature, saying:“Farmers do so much for the wider rural economy, the environment, food security and tourism, yet the support and recognition we get for the work is as low as it can get. We have undertaken significant environmental work, which has been taken for granted by Government.

“It is very important that the public and politicians understand the implications if farming gets a bad deal after we leave the EU and what is likely to happen to food security, our rural economy and way of life here in Wales.”

Walking around the farm the Parry’s also explained that the timing for the current Sustainable Farming and Our Land consultation is something the Welsh Government could address to help them.

Cath said: “We simply haven’t got the time to look at the consultation document. If the Welsh Government is serious about helping us, they will recognise that and move the deadline. We want to have our say but right now we are concerned about the collapse in export markets, and who our customers will be after 31 October. Giving us all more time to respond would be better for the industry and ultimately give the Welsh Government a better response.”

Farmers’ Union of Wales officials, who joined the Parry’s on the farm tour, also used the opportunity to highlight environmental policy concerns.

FUW Policy Officer Ceri Davies told the AM that members across the country are concerned about the new agricultural pollution regulations due to be introduced in January 2020.

“There is a fear across the farming community that unless the introduction of pan-Wales land management regulations are opposed, the impact on farm businesses, like Pentre Farm, would be significant.

“We support the work that has already been done by NRW and the Wales Land Management Forum sub-group, which identified targeted and proportionate approaches to solve problems and it is sad the work which has already been has so far been ignored.

“A joined up approach, working with the industry, would be a sensible way forward and I hope Welsh Government will take that board,” said Ceri Davies.

Mr Asghar further heard that around 60,000 people are employed on farm holdings in Wales, in addition to the thousands employed in businesses which are reliant on agriculture such as contractors, feed and machinery merchants, mechanics etc.

Guy added: “I would urge the Welsh Government to remember that farm businesses, and family farms in particular, are an essential part of the economic, social, and cultural fabric of Wales.

“Farmers are an exceptional conduit for money, so if our businesses are thriving we reinvest and this, in turn, brings wealth to second and third sector businesses and the wider rural economy.”

Gwent FUW County Executive Glyn Davies, explained the importance of maintaining the lamb supply chain, whereby lambs are reared in the uplands and then sold to farmers like Guy and Cath for fattening, before being sent to the abattoir.

He said: “It was good to have representation from the 3 sections of this supply chain present – our County Chairman Wayne Langford, who produces primarily store lambs, the Parry’s who fatten 1,000 lambs a year, and Chairman of Farmers Fresh Terry Bayliss. It gave us the opportunity to explain the value of the lamb market to Mr Asghar and highlight the roles that each section plays.’’ 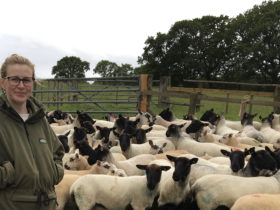