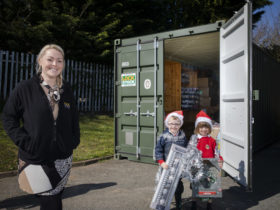 Riverside vandals are putting lives at risk after five rescue aids were stolen from their posts alongside the Tawe in less than a week.

Swansea Council’s water safety team were called yesterday morning after concerns were raised by a member of the public that some were missing.

A quick survey revealed five had gone missing since the sites were checked a week ago and all were replaced within hours.

But Robert Francis-Davies, Cabinet Member for Innovation, Regeneration and Tourism, urged residents to report repeat incidents and to report anyone they spot tampering with the aids to the police.

He said: “It’s a criminal offence to tamper with rescue aids and we are checking CCTV to see if there is any evidence of who might have taken them. Any evidence will be immediately forwarded to the police for prosecution.

“This kind of vandalism is not fun, it’s not a victimless crime and it really can put people’s lives at risk.

“We’ll be stepping up our checks and patrols in the area to deter this kind of behaviour and to replace any missing or damaged equipment.”

Cllr Francis-Davies said the council’s water safety team has a rigorous approach to checking rescue aids in the Marina area and along the Tawe to help keep people safe. It also works closely with South Wales Police and the Royal Life Saving Society to highlight the need to stay safe near water.

He added: “Residents can be our eyes and ears, particularly in the warm weather. If you see suspicious activity around rescue aids, spot that one has been tampered with or is missing altogether, please report it to us as soon as you can. Don’t leave it to someone else.”