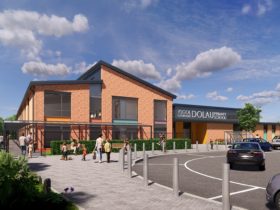 Swansea University is establishing a partnership with Columbia University in New York, one of the USA’s leading universities, which will encourage wider research collaboration and other benefits such as possible student exchanges.

A delegation of researchers from Swansea, led by Vice Chancellor Professor Richard Davies, visited Columbia to discuss opportunities for joint working.  The Swansea team was accompanied by Kirsty Williams, the Welsh Government Cabinet Secretary for Education.

There were already informal links between Swansea researchers and their counterparts in Columbia. The new agreement builds on these and puts relationships between the two universities onto a more formal and organised basis.

Areas of collaboration covered by the partnership include:

During the visit, the Swansea and Columbia teams also discussed the potential for student exchanges.

International partnerships with top universities have been central to Swansea University’s success in recent years, which has culminated in it being shortlisted for UK university of the year.

“Swansea University’s broadening academic partnership with the extremely prestigious Columbia University signals our growing stature and reputation on the world stage and is the latest in a series of partnerships with global leaders of HE and business. Our academics are delivering world-leading research and we are increasingly being recognised as punching well above our weight on a global stage. This is evidenced by our shortlisting for the Times Higher Education’s  Datapoints Merit Award, which highlights universities described as unsung heroes – those whose research performance outpaces the acknowledgement of their strength.”

“This is a historic moment for Swansea University and marks the latest in a number of flourishing international partnerships with universities across the world.

“Collaboration with such a prestigious institution will allow the university to build on its reputation for excellence and extend its work in a number of fascinating and highly important fields of research.

“I look forward to seeing the results of this partnership and hope it will open new doors for both Swansea University and Wales.”