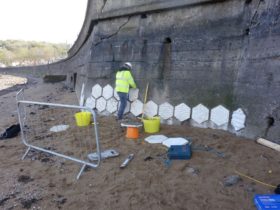 Sealife to be boosted by scientific Swansea tile team

High-profile business organisations have re-stated their backing for Swansea’s transformation as it gathers pace.

“Findings from our latest business barometer surveys show that the majority of our members predict that they will be performing better in the near future than in recent times which can be linked to the upward curve that Swansea is on.

“The on-going regeneration work taking place throughout the city has the backing of the business club and it’s exciting to see the work getting under way as we begin to paint a picture of how the new and improved Swansea will look when it’s complete.”

“I think every one of us who loves Swansea and has a vested interest in seeing the city centre thrive is pleased to see this important regeneration work pressing ahead.

“I know the 800 or so BID area businesses are invested in the regeneration and the long term benefits it will bring to the city centre in terms of vibrancy, visitor numbers and better accessibility.

“This is one of the most important chapters of Swansea city centre’s history so far and we are all looking forward to seeing it take shape during which time the city centre and its businesses are very much open for business as usual, and we encourage shoppers to support them.”

Swansea’s skyline is starting to get populated with busy cranes – and more will come with the building of the digital arena, the streetscape is bustling with heavy machinery and there has never been such numbers of hi-viz jackets and hard hats.

Swansea Council leader Rob Stewart said: “All this positive energy shows that Swansea is building for the brightest of futures.

“Our streets bustling with building activity proves that the city means business for its residents, traders and visitors.”

These are major projects still to come: