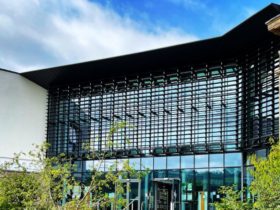 A host of gastronomic delights will be served up in Newtown during August as an exciting, new ‘pop up restaurant’ concept opens in the Mid Wales market town.

Anna Cooperwhite, owner of The Granary Restaurant, is inviting a small army of talented chefs from across the country to guest at the ’pop up restaurant’ during the month while head chef Seamus Russell expands his knowledge with an internship at the three-star Michelin restaurant Geranium in Copenhagen.

“The timing of Seamus’ internship at Geranium is not perfect but it’s too good an opportunity for him to pass up,” said Anna. “He is going to a three-star Michelin restaurant which is going to be great for us because he’s going to come back with lots of ideas.

“I could have closed the restaurant for a month while he was away, but instead I see it as an opportunity to try something exciting and different.”

She has drawn up a rota of guest chefs who will be cooking their own menus to tantalise the tastebuds of diners at The Granary. Cuisines from around the globe to suit all tastes will be featured and Anna is hoping that diners support the innovation.

Mark Ellis of the Allium in Tattenhall, Cheshire and a resident chef on BBC’s Great British Menu will be cooking his menu on August 31 and James Sherwin from Wild Shropshire is due to confirm his dates.

Mark’s sympathetic and intelligent use of great ingredients and constant search for perfection and his precise cookery techniques have earned him three AA Rosettes at Peckforton Castle where he spent nine years before opening his first solo restaurant Allium to critical acclaim.  More recently, he opened Shippon by Mark Ellis at The Plassey holiday park, Bangor-on-Dee.

After two recent appearances on the Great British Menu, Mark is considered one of the industry’s rising stars.

Anna thanked Gareth Ward from Ynyshir Restaurant and Rooms, near Machynlleth, Stuart Collins from Docket No 33, Whitchurch, Paul Askew, Ian Pengelly, Masterchef Leo Kattaou and Tom Kitchin for their help and advice and is hoping to collaborate with them in the future.

She also plans to showcase lots of local talent too, with Thai, Brazilian, Syrian and Spanish themes, musicians and cocktail makers at The Granary.

A Montgomery wine tasting night is planned for August 16 to complement the Blackrock Grill, local farmer Ifor Humphrey’s Wagyu beef will be the subject of a burger night on August 22 and Adele Brecon is to hold a gin foragers night on August 25. There will even be an afternoon tea at The Granary on August 18.

A Syrian chef, who has made a new home with his family in Newtown, will be cooking traditional Syrian dishes at the restaurant from August 8-10. Money raised over the three nights will go to Medicins Sans Frontieres (Doctors Without Borders) who deliver lifesaving humanitarian aid to millions people in war-torn Syria.

“After all of the support the Syrian refugees have received since arriving in Newtown, we at the Granary are giving them an opportunity to give back to the community by showcasing their amazing culture and food,” said Anna. “It promises to be an exciting culinary experience.”

Anna has recently rebranded her restaurant, which was previously known as Mirrens, to reflect a move up market to fine dining under the direction of Russell, who has worked at the one Michelin star Ynyshir Restaurant and Rooms, the two Michelin star Noma in Copenhagen and The Little Truffle on Australia’s Gold Coast.

Concentrating on local produce, the best of Welsh and British food producers and foraging for ingredients himself, Russell has introduced a new culinary approach. Each dish is cooked to order and crafted to the very highest specifications while menus are seasonally focused, dictated by nature and produce available at specific times of year.

In just four months, Russell’s food has made a big impression, having been mentioned by the Michelin Guide as a place and chef to watch. The restaurant is attracting excellent reviews and diners are travelling from as far away as Shropshire and Cardiff.

Anna, who divides her time between The Granary and the managing director’s role at accountants Whittaker & Co in Newtown, is delighted the restaurant is putting Newtown on the map for foodies.

After nine years of running Mirrens and seeing little return on the investment due the overheads, she decided to switch to fine dining to give the restaurant a point of difference in the town. Market research had revealed that there were 38 other places selling similar lunchtime food.

“It was time to stop it being just another eating place, to put us on the map and get us noticed,” she said. “It’s the right time with the way the town is developing, as people’s mindsets are changing. My goal is to get the restaurant recognised.

“By doing taster menus and fine dining, all our costs have reduced which means that we are on top of wastage in the kitchen and the produce that we were using whilst the average spend per customer has increased dramatically.”

To enhance its marketing and promotion, The Granary has recently joined MWT Cymru, the independent company representing around 600 tourism and hospitality businesses across Powys, Ceredigion and Meirionnydd.