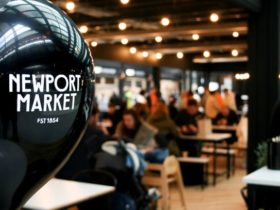 The same team behind Cardiff’s successful alternative events venue The DEPOT are transforming a 7,000 square-foot former theatre in Newport into a temporary street-food-hall.

This how the space in Newport looked pre-transformation…

Named ‘Stow Hill Market,’ the pop-up on Stow Hill Road road will open every Friday and Saturday for  eight weeks, and feature a weekly changing line-up of award-winning street food traders, along with a pop-up cocktail and craft beer bar.

How The DEPOT looked when it first opened in Cardiff…

The venue will be themed and decorated in a similar way to the DEPOT venue in Cardiff – with industrial influences throughout, and a heavy reliance on reclaimed and repurposed materials.

Traders confirmed to feature at Stow Hill Market so far include;

In addition to the street food traders and pop-up bar, the second floor of the venue will be used to screen major sports events and classic winter movies on a giant screen.