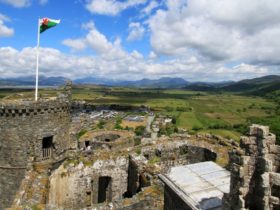 This month sees the 450th anniversary of the death of Humphrey Llwyd (1527-1568), credited by some as the inventor of Britain.

To mark this anniversary, The National Library of Wales in Aberystwyth will be mounting an exhibition to show some of his works and explain his many achievements.

Llwyd’s achievements include producing the first published map of Wales as a country, translating the early Welsh chronicle the ‘Brut y Tywysogion’ into English, helping to steer the Bill for the translation of the Bible into Welsh through Parliament, fostering the idea of Wales as a nation, popularising the story of Prince Madoc’s discovery of America and coining the phrase British Empire.

In addition, he also indirectly helped to create one of the core collections of the British Library, the Royal Collection, through his work collecting books for his patron the Earl of Arundel.

During his life, he was described as “the most famous antiquarius of all our country” and his biographer Anthony Wood described him as “a person of great eloquence, an excellent rhetorician, a sound philosopher and a most noted antiquary and a person of great skill and knowledge in British affairs.”

Saunders Lewis described him as “one of the most important of Welsh humanists and a key figure in the history of the Renaissance in Wales”.